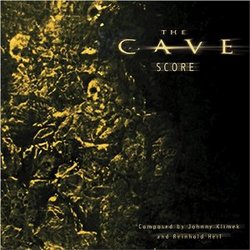 Heil and Klimek's recent collaborative score for Land of the Dead received little praise for its droning sound and numerous short cues. Their newest effort for The Cave is more of the same. The majority of the 40 cues on the score album are ambient electronics, sometimes dissonant, that work well in the film to bring out a creepy sense of dread in the dark places beneath the surface. But beyond the soundscape for the underwater cave setting for the film, the score does very little else. The cues are very short and never have much chance to build into anything besides background music. The few moments when the music adds to the events on screen are times when low strings perform moving bass lines that punctuate the action on-screen ("Team Enters the Water", "Underwater Search" and "Tyler's Mission").

The 75-minute album is way too long and makes for a very tedious listen. Some of the more interesting cues are the action material rather than the suspense cues, such as "Rapids" and "Saving Katherine". Some parts of the score may resurface as trailer music, "The Ascent" comes to mind in particular, but generally, this score will likely be forgotten. Sadly, the only thematic development comes in the final cue, which is partly an electronic remix. Like the various artists soundtrack album, the score CD for The Cave works for the film, but should probably did not deserve an album release.