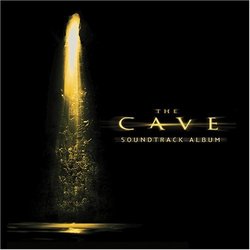 The Cave is a horror/action film about a group of divers who find horrible monsters in a hellish cave system. The soundtrack album features a collection of metal and hard rock songs, which have nothing to do with the film. Various artist collections, while they occasionally sell well, rarely warrant a review. However, that having been said, the soundtrack to The Cave does have a dark, fast-paced feel, which reflects the nature of the film. While some of the song titles have some humorously ironic connections with the film (i.e. "Daylight Dancer" and "Love Lost in a Hail of Gunfire") the songs have little to do with the film. Most of them meld into a monotone of raging guitars, but a few songs do stand out, namely "Nemo" by Nightwish (perhaps a connection that the film takes place underwater?) and Ill Nino\'s "I\'ll Find the Way". This soundtrack contains no score cues, though, and should only be considered by fans of hard rock and metal.