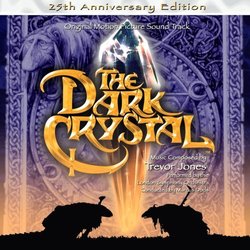 Although a two-disc set for Trevor Jones\' score to The Dark Crystal was released by Numenorean Music a few years back, it was a limited release and not available in stores to the general public.  Now, just in time for the 25th Anniversary of the film, the Jim Henson Company and La-La Land Records have worked it all out and are finally releasing this much sought-after score to everyone.  The only drawback is, it\'s the same program as the original LP (and the first disc of the previous limited release).

In the film, the score is rather dark and foreboding, only occasionally interrupted with sweeping lyrical romanticism. You wouldn\'t really know that from listening to the album - the bulk of the cues Jones opted to include are focused on the emotional romantic ones, with occasional dips into the world of darkness. It\'s a very solid listening experience, and the London Symphony Orchestra does an stand-up job.

Running only 40-minutes long, it\'s just long enough to feel full and satisfying, but is still missing over 30 more minutes of score that would have been appreciated if included in the release.  That they couldn\'t secure even a few "bonus tracks" for the release is a shame, and if you already own the 2-disc limited edition, there\'s no need for you to buy this one - the disc is identical to the first disc, just with nice anniversary edition packaging.  If you\'ve never had a chance to experience The Dark Crystal though, take advantage of this opportunity to make up for lost time.