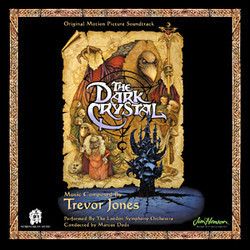 After much delay and anticipation, Numenorean Music's two disc release of the score to The Dark Crystal is here. Featuring the Trevor Jones's original LP release on the first disc, and the complete film score as heard in the film on the second, this release should satisfy most fans who have been eagerly awaiting its arrival.

The score is rather dark and foreboding, only occasionally interrupted with sweeping lyrical romanticism. You wouldn't really know that, though, from the first disc - the bulk of the cues Jones opted to include are focused on the emotional romantic ones, with occasional dips into the world of darkness. It's a very solid listening experience, and the London Symphony Orchestra does an excellent job. The sound quality is perfect - you can throw all those old LP bootlegs away!

The second disc, however, is a mixed bag. Yes, it's the complete score - but as heard in the film. That means, edits and cuts are here. So, it's not really everything Jones recorded; there is even an instance where the music he wrote shows up on the album version, but not the film version. How disappointing! Even more disappointing is the sound quality. While The Dark Crystal was recorded to digital masters, those masters were not handed over by Jones for this release, for his own personal reasons. So, the producers of the album went to the optical masters. While a restoration was attempted, the sound quality leaves much to be desired. It's a shame that the composers lack of involvement prevented the best possible release of his own work.

Those issues aside, however, the second disc has pretty much every bit of music you would really want to hear from this film. I personally found myself favoring only certain portions of the disc, and felt that it didn't lend itself to as enjoyable a listen as the first disc. The liner notes are informative, containing an excerpted interview with Jones. With a rather low cost of $24.95, this album is distributed exclusively through BuySoundtrax.com (although you can find it being sold at other online stores), and is worth picking up only if your content with a perfect 40-minute album, and an okay-sounding 72-minute score.