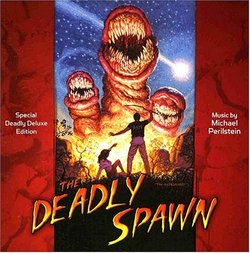 1983 saw some true gems in the film music industry including Goldsmith's Under Fire, Barry's High Road to China, and, of course, Williams' final Star Wars film (for a while), Return of the Jedi. But other, less remarkable, films were released in 1983 as well, among them The Deadly Spawn (aka Return of the Aliens: The Deadly Spawn).

For some reason, Perseverance Records thought it was a good idea to release Michael Perilstein's score to this film in an Expanded Deadly Deluxe Edition. But between the buzzing, droning electronics that make up most of the score and the cheesy jazz/rock music for the "romantic" scenes, this is some of the worst music I've ever heard. The remastered recording still sounds muddled as if it was on a really old cassette tape, say from 1983.

I don't know what makes this a deluxe release except maybe for the 12-minute suite of more of the same at the end, supposedly for a future sequel that will blessedly never happen. And I had wondered why it was a "deadly" deluxe edition.