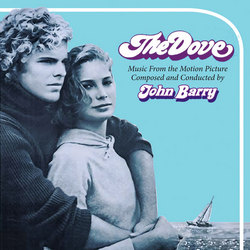 For the 1974 Paramount film The Dove, composer John Barry composed a carefree, breezy score to follow the adventures of a boy sailing around the world. The choppy waters of rumbling marimbas over a dark, low bass note lead into a serene, cyclical guitar figure (infused with an appropriately '70s spirit) that propels the main title—a romantic, lyrical string theme that sails through the film's dramatic, episodic voyage. Punctuated with glinting French horn phrases, the theme glides with an elegant, unflagging energy—upbeat in mood, with moments of typical Barry melancholy. The score's other major theme is first presented as a song, "Sail The Summer Winds," which Barry wrote with longtime James Bond lyricist Don Black. Sung by English pop singer Lyn Paul, the song is an ode to youthful exploration and the hippie spirit.

To present John Barry's beautiful music for The Dove, Intrada—after some years of digging—located the unmixed eight-channel scoring session takes for the soundtrack album that first appeared on the ABC label in 1974 and were thought to be lost. Having these masters allowed us to recreate Barry's original mix but with greater clarity than before, as well as presenting the two tracks that included sound effects without those effects as bonus tracks. Intrada was also given access to the original mono music stems vaulted at Paramount Pictures, allowing for the inclusion of eight additional, previously unreleased John Barry cues, totaling another 16 minutes.