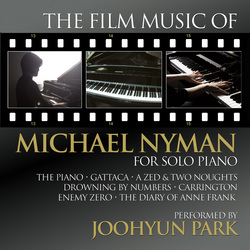 The Film Music of Michael Nyman for Solo Piano

BuySoundtrax Records is proud to present The Film Music of Michael Nyman for Solo Piano featuring piano performances by Joohyun Park. "I started this piano album by concentrating solely on music from The Piano," said Park. "All music of Michael Nyman has stunning, beautiful and dynamic melodies and it really began to capture my attention. I wanted to record more of Nyman's work after working on the pieces from The Piano."

Jeff Bond describes (in the album's liner notes), "Nyman's trademark as a composer may be the way he derives deep emotions from an essentially minimalist style. His scores can be lushly orchestrated or paired down to solo instrumentation, but his music often plays as portraits in miniature that reveal constrained, expressive feeling—longing bursting beneath the surfaces of the characters he writes for."

"Minimalism is emphasizing musical ideas by repetition with the very basic and little materials," explained Park. "Nyman is a minimal music composer and pianist with great passion. It was a challenge to express minimal music that was written by the person who invented the term, but his great music also gave my passion great momentum. I am honored to produce a piano album of this great musician's work."

This is a limited edition release of 1,000 units.