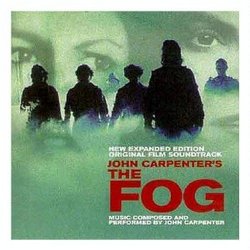 The Fog tells the story of a ghostly crew of a fabled shipwreck returning to wreak havoc upon the denizens of a small coastal community. Although not one of Carpenter's better films, his score bears his unmistakable touch and helps give the picture its voice. The music works well within the film but it's even more enjoyable on its own.

Previously available only as a German Import from Varese Sarabande, this new expanded version includes some 14 minutes of previously unreleased music as well as a 6-minute radio interview with Jamie Lee Curtis, (which would have been better as a DVD supplement than as an extra on a CD). It starts off with John Houseman telling the legend of the Elizabeth Dane. Thankfully this dialogue track (the only one) does not step on any music cues. The tracks from the previous release are all intact and in pretty much the same order. The bonus tracks are mostly variations on the other themes, but they're a welcome addition just the same. As he does on his scores to Halloween and They Live, Carpenter is quite the master at taking a simple theme and putting slight variations on it to fit a scene.

The music on The Fog is primarily atmosphere and mood oriented. Working again with synthesizers, Carpenter creates simple piano-based melodies that are methodically paced and work at fraying your nerves. Pipe organs are also used to create a gothic atmosphere of impending doom. With the exception of "Reel 9", none of the music is concerned with any screen specific action. This is one of the reasons why the score works so well on its own. Although it, too, is more concerned with providing a spooky atmosphere, "Reel 9" is the only track that has musical 'stingers' that match anything on screen.

Following on the heels of their expanded edition release of Carpenter's Escape From New York, the people at Silva Screen and Carpenter's musical associate, Alan Howarth, have done a better job on this release. Compared to the previously released CD, the fidelity on this expanded version is somewhat improved. Tape hiss from the original masters is still audible, but the stereo separation has been enhanced. They have also wisely avoided truncating any of the original tracks as they did on EFNY and nixed any bad remixes of the original material.

Although not a seminal work in the vein of EFNY, The Fog's effectiveness lies in its low-key simplicity. Sandwiched in between his score for Halloween and Escape, this score is closer in feeling to Halloween and doesn't really hint at the musical leap that Carpenter would undertake on his next venture. That said, this is yet another excellent Carpenter score using simple minimalist themes to create suspense and atmosphere. Highly recommended.