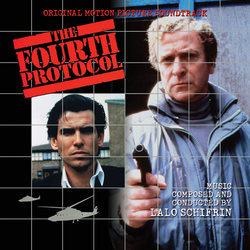 Schifrin's music for the film is a rare example of the composer scoring an action film orchestrally. While his musical roots in jazz have found their way into his best-known scores, Schifrin has always shown himself proficient with orchestral scores, although the majority of his modern action scores have largely embodied a modern jazz musical milieu. As a result, The Fourth Protocol is a kind of cousin to his orchestral score for Telefon. Like that earlier score, the music for The Fourth Protocol is played mostly in the dark registers—lots of cello, bass clarinet, and bassoon evoking the dark possibilities inherent within the film's title. Schifrin's music for The Fourth Protocol is not generally a character-driven score. With few exceptions, he uses the music to drive the story's action rather than evoke personalities and perceptions.

Originally released in 1987 on vinyl by DRG and on compact disc the same year by England's Filmtracks label, The Fourth Protocol was one of the first soundtracks to be released on compact disc, and one of the most elusive. The original CD release had some sonic issues and fans of the composer have been waiting a long time for that to be addressed. Buysoundtrax is excited to present a new compact disc release of The Fourth Protocol, with liner notes written by author Randall Larson and new mastering from Digital Outland, making it possible to completely enjoy all the details of Lalo Schifrin's music for the film.