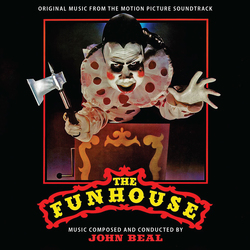 Intrada announces the premiere release of John Beal's impressive score for the 1981 Universal horror film The Funhouse. Although the film capitalizes on the horror craze started by Halloween several years earlier, it did not follow suit in its approach to scoring. Whereas the earlier film featured a legendary electronic score, The Funhouse's executive producer Mace Neufeld insisted that a largely orchestral approach was warranted. The orchestra mixed with some electronics brings a sophisticated depth to this early entry in the slasher film genre. While the score starts unassumingly with a simple piccolo solo representing the kernel of Beal's main theme, the mood is quickly shattered by an orchestral slashing gesture before transitioning to the other major theme – the carousel waltz. The score culminates in a full-blown passacaglia of sorts as the action in the funhouse comes to a head.

Fans responded enthusiastically to the score, with the composer receiving letters from around the world for decades. For this release, Intrada obtained the original 24-track session elements stored at Universal, allowing the composer to oversee a new mix, highlighting details and a stereo image never before heard.