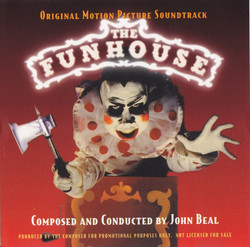 It can be said that for a horror score to work effectively, it must contain certain elements. Some of these elements may be fierce shrieking strings, low brooding woodwinds, strange synthesized effects, and the ever-present high-sustained strings. For the 1981 film, The Funhouse, director Tobe Hooper (Poltergeist, The Texas Chainsaw Massacre) chose composer John Beal to make the horror in the film even more horrific. Beal, well known at the time for his work on television (including "Vega$" and "Eight is Enough") has been renowned in recent years for his work composing original music for theatrical trailers.

Beal begins the Main Titles with a soft flute - but shatters the complacency with hard orchestra hits, which then segues into the main theme of the film. This theme is performed with the full orchestra and provides a glimpse into the very full and well thought-out score that we are about to listen to. From the circus motif to the ominous yet romantic "love" theme, The Funhouse is filled with plenty of suspense (at times provided through the appropriate use of pizzicato strings) and moments of sheer terror.

Track 5 ("Zena") begins with swelling string chords in counterpoint with low string hits, a technique which not only gives the score a large classical element, but also reminds me of Record of Lodoss War, which was a Japanese Anime series which came out in 1990 (almost 10 years after The Funhouse). That score also had a large classical influence, and it's the only thing I can really point to as an example of similar scoring styles.

This CD was a long time in coming, and although it runs only 38 minutes long, that is a more than ample amount of music for one to listen to and thoroughly enjoy The Funhouse. I have listened to a lot of John Beal's music - perhaps more than anyone else, aside from John. I thought that I knew his style of scoring well enough that if I listened to an older work of his, it wouldn't be much different stylistically than what I had heard in the past. Well, I was wrong. Most of the music I had heard before was synthesized music (and while John has one of the best sample libraries in Hollywood, it can be noticeable on occasion), and I hadn't really heard his orchestral work. So it was with complete surprise that what I heard on this album was so unlike anything I had expected from John - all my preconceived notions were rendered immediately null-and-void. As such, The Funhouse is probably one of the more satisfying horror-score listening experiences I can think of in recent memory. It doesn't fall into the trap of becoming "noise for the screen", and it seems to have been inspired at times by the works of Bernard Herrmann and Elmer Bernstein - while simultaneously maintaining a fresh feel to it.

Released as a promo album, this album is destined to become a collector's item, and I would strongly suggest picking one up for your collection, and your listening pleasure. You will not be disappointed!