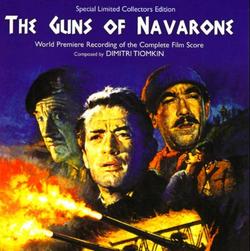 The Guns of Navarone

Review: Guns of Navarone (re-recording), The

If, among film music fans, I mention the name Max Steiner, there is an immediate charge of recognition. "He wrote Gone with the Wind!" some proclaim, while others remember his great King Kong. There is smaller recognition if I continue to Miklos Rozsa, yet some recognize that he composed Ben-Hur. But for some reason popular recognition has eluded Dimitri Tiomkin. Here is a composer who wrote It\'s a Wonderful Life and High Noon and was as prolific as any golden age composer, but his name is infrequently mentioned among the giants of the genre.

Hopefully this limited release by Tadlow will serve as a small step to correct that oversight. One of the highest grossing movies of 1961, The Guns of Navarone appeared when Hollywood was fascinated by the big budget WWII film. The movie follows the exploits of six Allied troops as they try to destroy the German guns positioned on the Greek island of Navarone. The score, which was nominated for an Academy Award along with the picture, follows the two main locales for the film to create a thematic score filled with explosive writing.

Of those two main locales, one is more properly an organization, the other an actual place. The organization is, of course, the army, and through countless years of movies about wars and army life, a recognizable enough musical language has developed around the army to justify my calling it a musical locale. Just thinking about it will cause your head to start ringing with trumpets and snare drum cadences. This martial music, for lack of a better term, is exactly the style Tiomkin uses for his main theme. "The Legend of Navorne – Main Title" begins with a crash in the orchestra, and the theme, which moves around the various members of the orchestra, is accented by brass fanfares. What makes the theme work is that Tiomkin refuses to treat the material in a straightforward way. Instead of making everything four-square in a common march time, he throws in interesting effects. For instance, a few seconds into the cue, he throws in a few triplets to keep the audience unsure of where the theme is going, in effect mirroring the uncertainty the small band of Allied troops face. He also packs a lot of musical material into a small space, something few film composers do even today. Instead of creating a strong theme and supporting it with basic harmonization, Tiomkin constantly has several lines going at once, curling in and out of one another. The result is a deep structure that rewards more upon repeated encounters.

The second locale is the Greek Isles. Tiomkin borrowed liberally from the sound of Greek folk music to create a counterpoint to the strongly military music of the opening moments. This sound is best heard in the "Intermission Music (Yassu)," and the following cue, "Anna." "Yassu" means "hello" in Greek and the music is appropriately warm and welcoming. A mandolin-like instrument strums the modally-inspired melody while flutes and strings support and give ambiance. In "Anna," a beautiful reed instrument doubled by the violin intones a decidedly Middle Eastern melody that wanders without every seeming to have a direction. It is a lovely moment and possibly the best cue on the CD.

All of this wonderful music (the "Sea Scene and Storm" is particularly wonderful, highlighting Tiomkin\'s assured control of musical timbre) is expertly performed in this new digital recording by The City of Prague Philharmonic Orchestra conducted by Nic Raine. This recording is a treasure, and to make it even more enticing, Tadlow included a few tracks from Tiomkin\'s The Sundowners. If you have ever wondered why reviewers like me make such a big deal out of golden age composers, this recording is the perfect argument for our view. It is a great chance to introduce you to a sadly overlooked composer through a sparkling new recording. I cannot recommend it highly enough.