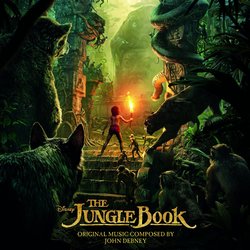 The Jungle Book went above and beyond impressing critics and movie goers alike. With a screenplay by Justin Marks and a star studded cast, there was little room for negative reviews. Directed by Jon Favreau, The Jungle Book was the first of two live action remakes Disney presented in 2016. The Jungle Book is a classic story originally written by Rudyard Kipling in 1894. Set in the Indian jungle, it tells the story of Mowgli—a boy raised by wolves who has to fight the tiger named Shere Khan with the help of Baloo the bear and Bagheera the black panther. This film was packed with beauty, rich colors, and outstanding scenery, which only composer John Debney (and a 104 piece orchestra with choir) could have brought to life.

The score Debney composed presents a diverse world of color. Each track is riddled with motifs and themes which reference the score from the original animation film written by George Bruns and songs by the Richard and Robert Sherman. Three reproduced songs were reintroduced from the 1967 animation: "The Bare Necessities", "I Wan'na be like You", and "Trust in Me" (which was only in the closing credits). These songs brought back a timeless sound, only adding to the authenticity of the story and Disney's past.

Before the movie begins, the audience is introduced to a new version of the Disney 'Castle Logo Music' which was arranged by Debney. Followed promptly after, the music seamlessly transitions into an arrangement of the 1967 main titles by George Bruns. This recall on the original theme is a great way to start a film which Walt considered his favorite. From the main title arrangement, the music takes a jagged turn toward a modern chase/action sound. After another quick transition, the music calms and presents the Elephant/Jungle Theme' in the track "Wolves - Law of the Jungle." The beginning of the film instills a calm and tranquil setting of the jungle. This atmosphere is supported with ethnic colors and delicate percussion. The more subtle, incidental music in the tracks "Water Truce," "The Rains Return," and "Mowgli's Leaving - Elephant Theme" display Debney's skill as a great composer. The excellent use of underscoring and tasteful melodic gestures really help set the mood and feeling of the jungle and the relationships it houses.

However, it is unfortunate how dull Sheer Kahn's music is. Upon his entrance, Sheer Khan is surrounded by ominous sounds and later filled with frantic action music. Albeit, the action music is very well written, but the lack of a strong theme is a shame. Played by Idris Elba, the tiger Sheer Khan rules the jungle with a vengeance towards humans. I was amazed that Debney (or producers/directors) did not use a distinct theme for Khan's anger and ferociousness. Sheer Khan instead is represented by rhythmic drumming, aggressive brass hits, and fast moving string runs which takes away from the quality of what could have been a great character development.

Around the middle of the film, after kidnapped by monkeys, Mowgli soon arrives at King Louie's Temple. I found this section of the film more unique than any other for its use of melodic storytelling as well as use of thematic material and variation. The temple itself has a three not motif which is played in the high horns as the camera pans up on the temple. As the temple scene progresses King Louie becomes angry at Mowgli and goes on a crazy chase through the temple to catch him (in the track "Cold Lair Chase"). What Debney does with "I Wan'na be like You" in this section it absolutely great! By using the basic melody from the song, Debney was able to create an action/chase scene which was truly unique to King Louie. By creating this cross reference scene, the whole atmosphere of the monkey temple scene provides a better musical continuity and story than any other scene in the film. As the temple comes crashing down at the end of the chase the audience can once again hear the three note horn motif from the beginning, only this time, it is in a lower register.

Similar to the temple scene, Debney also uses a comparable technique with the slithery theme for Kaa. Even though her song, "Trust in Me" is only in the end credits, the hypnotic melody is featured in many spots throughout the film. First in the track "Kaa - Baloo to the Rescue" where the theme is presented in a style similar to the Bruns and Sherman version. Later on, Debney takes his own spin on the theme in the track "The Red Flower." With the use of forceful rhythmic percussion and choir, Kaa's theme takes on a driving militaristic sound in Mowgli's search for the red flower.

By far, the greatest beauty the score has to offer is the 'Elephant/Jungle Theme'. The Elephants are presented as all-knowing and the wisest animals in the jungle—the protectors. The 'Elephant/Jungle Theme' is an amazing display of grandeur and majesty. The theme is a large, slow-moving, yet very simple melody which can get stuck in your head for hours. The theme is most clear in the track "Elephant Waterfall." Debney is extraordinarily clever with the way this theme works. The melody is constantly modulating, or changing the key of the piece. This constant modulation helps propel the melody making it seem as if it is growing with each phrase in orchestral size as well as thematic importance. Unfortunately, this theme may not be as special as it sounds. The melody embodies many similarities of both composers Jerry Goldsmith and John Barry. For example, from the film Medicine Man, the track "The Trees" has a very similar motion in its melodic shaping as well as the importance of its modulation. It could also be compared to the "I Had a Farm (Main Title)" of Out of Africa, by John Barry which presents a wonderful landscape of sound to the beauty and strength of Africa, again, very similar to the majesty of the elephant and grandeur of the jungle.

Regardless if the theme was influenced from other composers, it is still a beautiful melody which fits the pacing of the film. Although Debney did seem to lack a bit of his own stylistic voice throughout this film, I find it hard to see another way this score could have been written. The beautiful balance between old and new demonstrates his versatility and craftsmanship as a composer. In the end, The Jungle Book's score inarguably is one of Debney's best amongst CutThroat Island and The Passion of the Christ. In the future, I hope to see Debney assigned to more of these A-list films; undoubtedly, he deserves it!