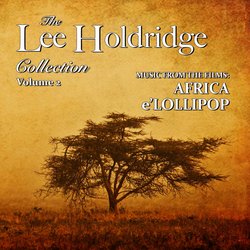 Dragon's Domain Records, to be distributed through buysoundtrax.com, presents The Lee Holdridge Collection, Volume 2 featuring music composed and conducted by Lee Holdridge for two feature films from his extensive filmography, Africa and e'Lollipop.

Lee Holdridge has scored a wide range of feature films, TV movies, television series and documentaries over the last four decades, with more than 220 projects, brimming with memorable and affecting music. Holdridge is particularly known for his lyrical, harmonic orchestral music but he's also highly adept at dramatizing action and adventure. Dragon's Domain Records celebrates two more of them in this second collection of his work; neither of them has been released commercially until now.

Released in 1999, Africa tells the story of a drug-troubled fashion model struggling to survive after a harrowing car accident leaves her stranded in the African bush. Holdridge composed a sultry score featuring soprano sax infused with West African percussion and copious synthesizers for the project. However his score was ultimately not used in the finished film. As are a lot of film scores that are unceremoniously tossed out, Holdridge's music for Africa is a worthy listening experience on its own.

Released in 1975, e'Lollipop tells the tale of two young boys—a young white orphan named Jannie and a black boy from the local village named Tsepo who meet face-to-face in Apartheid-stricken South Africa. After his parents tragically perish in a car accident, Jannie is temporarily sent to a missionary station near Tsepo's village until more permanent housing arrangements can be made. Jannie and Tsepo share a lollipop through the missionary window and immediately become inseparable friends. After a serious playtime injury threatens Jannie's life, Tsepo, his fellow villagers, and the missionary doctors work tirelessly to proffer ten-year-old Jannie special medical treatment in the United States. Stricken with guilt, Tsepo takes it upon himself to travel to New York City in search of Jannie and aide his recovery. e'Lollipop was directed by Ashley Lazarus starring José Ferrer, Karen Valentine, Norman Knox, and Muntu Ndebele. An alternate version of e'Lollipop retitled Forever Young, Forever Free featuring a truncated version of the film was released to audiences in the United States.

Dragon's Domain Records is excited to bring e'Lollipop and Africa to compact disc for the first time as part of the Lee Holdridge Collection, Volume 2, newly remastered by James Nelson at Digital Outland. The booklet includes exclusive liner notes written by author and composer Brian Satterwhite with the participation of the composer.