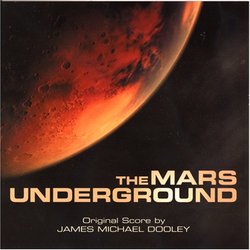 Whether you know it or not, you have heard James Dooley's music. He started at Hans Zimmer's Media Ventures in 1999 and has worked on films such as Pirates of the Caribbean, Black Hawk Down, Tears of the Sun, King Arthur, and The Ring. In addition, he has also composed music for numerous television commercials, including Porsche and Mercedes, and documentaries for National Geographic, ESPN, and The History Channel. He recently composed the score for the ill-fated Bruckheimer television series "Skin". His latest solo project is for the documentary, The Mars Underground, and he's even released a soundtrack of the music.

This film is a CGI-driven documentary about the possibilities of colonizing Mars. Dooley was given the task of writing music for numerous scenes of the "camera" panning across projected CGI landscapes of Mars and keeping the viewer interested while the landscape races past the screen. The opening and closing cues on the album correlate with these majestic scenes, "Arrival on Mars" and "Our Future with Mars", respectively. The score is performed with synthesizers, which provides an appropriate futuristic space feel for a documentary. Both cues feature an underlying string motif that keeps the music moving. Bits of brass and choral sounds are thrown into the mix to vary the music; the theme is first introduced in "Arrival on Mars" in the brass and is reprised in "The 90 Day Plan" and "Spreading the Word".

A secondary motif is introduced in "Prospects and Plans", which is a pulsing rhythm performed by strings and bells and accompanies scenes of science and planning for the expedition to Mars ("Dr. Zubrin", "History Has Taught Us", "Mars Direct" and "A New Direction"). Scenes toward the end of the documentary that explore the outer parts of Mars are given an ambient feel ("Experiencing Mars" and "Planetary Civilization"). The remainder of the score consists of orchestral music that accompanies the story of colonizing the red planet. Dooley's contemporary approach produced a much greater musical presence for The Mars Underground than what normally accompanies documentaries, but the visual journey of this film required such an approach.

James Dooley has had a hand in some of the past few years' most popular film scores and his style is clearly audible in this documentary. His bold theme and vibrant orchestrations give Mars the life that this documentary was trying to portray. The album packaging is impressive with various shots of the red planet on the covers and the disc itself and is available by clicking on the purchase links to the left.