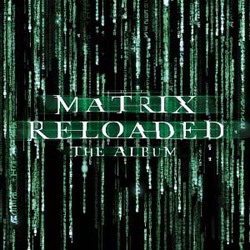 Massive marketing has once again invaded our little sphere of film score releases in a move that I applaud for its savvy and disparage for its impact. In my recent review for the Bend It Like Beckham soundtrack, I bemoaned the rise of the music inspired by soundtrack; magical scores languish without a release while tired clichés masquerading as fresh sounds are pandered to the masses. Occasionally the main themes are arranged into a suite on these recordings, but by and large the major companies realize film scores cater to a niche market and so do not waste their advertising dollar.

With The Matrix Reloaded, however, Warner Brothers has unleashed a marketing frenzy not seen since The Phantom Menace in 1999. While no lego Neos have (yet) appeared, almost every sphere has been infected, including the score release. As with the first film, a music inspired by release featuring Rob Zombie, Marilyn Manson, and others was compiled, giving credence to the movies goth/industrial/punk aspirations, but a second CD was added to the mix containing the score. As the music inspired by disc contains music strikingly similar to the first movie (with the exception of an interesting, but ultimately vapid Paul Oakenfold remix of Dave Matthews Band's "When the World Ends"), I want to concentrate on the score.

The second CD in this set is truly an ADD listening experience, as it moves from one style to another with little transition or blending. It begins with the main theme familiar from the first movie,dissonant chords emerging from one another until they are overcome with swirling strings, all drawn out an extra 30 seconds so we know something new is going on. The "Main Title" cue is immediately followed by a fascinating permutation of this theme in "Trinity Dream". The dissonant horn and trumpet chords from the opening are re-imagined in a grotesque dance that leaves one unsatisfied with its premature ending.

After these four minutes, the disc descends into a strange mixture of techno remastering and original score. In fact, aside from these opening cues, the only place the orchestral score appears is in, yes, a "Matrix Reloaded Suite". Beginning to get suspicious of this score/soundtrack release? You should be. The parts of the score that are presented whole and uncut are those in which composer Don Davis worked with Juno Reactor, the ambient/trance dance band. In these cues, the geriatric connotations of an orchestra are infused with the pulsations and sonic gradations of modern industrial music to add sex, power, and excitement to the sound. Does it work in the film? Yes. Does Davis's score power many of the movies best moments? Yes. Then why does only 20 minutes of his over 90 minute score appear on the album while his work with Juno Reactor is presented uncut? In one word: marketing.

This is not to say that the release is horrible; many nice moments exist. Rob Dougan's cue "Chateau" for one of the climatic fight scenes is reminiscent of his "Clubbed to Death (Kurayamino Variation)" from the first film and works beautifully with the choreography, even if it does become blandly repetitive halfway through. Likewise, Davis and Juno Reactor's work on "Mona Lisa Overdrive" is pitch perfect for the films highlight, the freeway chase, generating great intensity. Unfortunately, the scores ADD nature rears back up with the aptly designated Don Davis vs. Juno Reactor cue "Burly Brawl". Davis's orchestral stylings battle with Juno Reactors hard driving beats in a constantly shifting palate. The two styles never merge even to the extent they do in "Mona Lisa Overdrive", and the result is a gangly cue that proves one of the least effective.

Davis's tour de force on this release is his seventeen-minute long suite. The opening moments build in intensity to a series of orchestral punches. What then follows is some of Davis's most beautiful music. Strings and a wordless chorus combine in simple harmonic progressions and regular phrasing. The minimalist texture is broken by tremolo strings and a harmonic ostinato built of a demented Dies Irae. Various ostinatos continue to build the tension until halfway through, when the music from Neo's discovery of his power at the end of the first movie is re-imagined with chorus and brass. The beautiful music from earlier then returns, interspersed with string ostinati and dissonant brass clusters. The process begins again, with minimalist repetition, pyramid-built dissonances, and almost Ligeti-like choruses building feverishly to a glorious release fifteen minutes into the track when all the forces come together. The pastiche, the quick-cutting between themes and ideas, coalesces in this moment, showing in microcosm Davis's ability in this movie to develop small cells of ideas, even those from the first film, into a narrative that does not feel rushed or forced. On the basis of his work in this movie and the first Matrix, Davis should be moving quickly into the top rank of film composers.

When I first encountered this release, I saw the coupling of score and soundtrack as cunning and audacious marketing. I applauded the opportunity for more people to encounter the wonders of film scoring. However, upon listening to it, the rose-colored glasses handed out with the hype were removed from my eyes. While The Matrix Reloaded contains more of Davis's music than The Matrix CD, it is mostly in his collaboration with Juno Reactor. I would have appreciated even more of his orchestral work, especially after the suite whetted my appetite. So, while I am certain that you will enjoy this score and while I understand the reasons it was released in this arrangement (the second disc also contains the enhanced CD material), it does not mean I have to like settling for a suite when the full score, industrial tracks and all, would make for stellar listening.