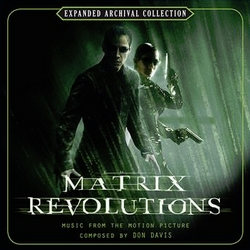 Warner Bros Pictures, WEA and La-La Land Records are proud to announce the Expanded Archival Edition of The Matrix Revolutions, the jaw dropping third act of one of the cinema's most fantastic trilogies! Newly remastered by Mike Matessino and supervised by composer Don Davis, this action packed extravaganza clocks in at over 2 hours featuring alternate bonus tracks as well as music recorded for the film, but ultimately cut out of the final print.

Film music journalist Tim Grieving takes you down the rabbit hole once again with his in-depth analysis of the film and its score with comments by composer Davis. Art direction by Dan Goldwasser round out this outstanding package.