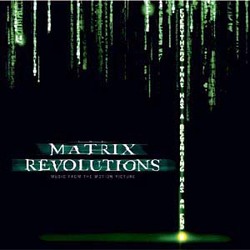 After the tragically brief score CD to the original The Matrix, and the truncated second disk to the The Matrix Reloaded soundtrack, we finally get a full length CD devoted to Don Davis' score. No soundtrack music stuck in 1995 electronica. Okay, maybe one song stuck in 1995's electronica ("In My Head"). Besides that, this is pure Don Davis brilliance. There's still plenty of Davis' score still unreleased, but here we get a proper representation of the full score Davis wrote.

The Matrix trilogy score is a masterwork; a milestone of modern film music. What is wonderful looking back at the complete work is how Davis very subtly developed the dramatic structure of the series. Starting with the strong influence of John Adam's romantic minimalism (specifically his piece Harmonielehre), Davis has grown with each Matrix score to grander levels. Here he reaches a zenith that is literally operatic. For Neo and Agent Smith's Battle of the Gods showdown, the album's centerpiece "Neodammerung" is Wagnerian in scale, with a full chorus in Sanskrit, from the Upanisads Hindu text (interestingly all about the coming of "the one").

From the first cue on, this score makes it very clear this is the finale to the series. Everything's bigger, from the familiar Matrix code opening titles ("Logos / Main Title"), the Sentinel theme ("Niobe's Run") and most importantly the reprise of Neo and Trinity's love theme ("The Road to Sourceville"). Almost every cue is the equivalent of the climax to another film. The scale of the orchestra is astounding. The brass forces its way through the trademark horn clusters with a real passion. Davis has been known to give his orchestras a work out and here he's pushing them to the breaking point with zeal. The album is at such a relentless fever pitch that it is actually fatiguing to listen to. The score doesn't have the emotional range of Reloaded, which has my favorite music of the series but all of the themes have already been developed elsewhere. Revolutions is simply one long third act payoff.

I have to admit I was fearful of Juno Reactor returning after their work on the last score. In particular "Burly Brawl" was an awkward track that was completely out of sync with the scene's aesthetic, especially if you were to hear the original music Davis wrote for the Burly Brawl. But I must hold to honesty, the collaboration here yields much better results. "Tetsujin" is a solid action track, including the Seraph Kodo drum motif. The closing credits track "Navras" is a remix of "Neodammerung" with Reactor's trademark Indian vocals and Goa trance beats. But this time, Reactor doesn't overpower the chorus and instead supplements and empowers it, layering in and out the Indian and Sanskrit vocals. This gives the album a forceful climax, though the true emotional zenith is one track before ("Spirit Of The Universe"). That track is an abridged version of three final cues from the film, compressing nine-minutes of powerful score into almost five-minutes, which gives it more of a punch.

I have heard from many that they find the music to this series atonal, repetitive and lacking of strong thematic material. And I say that Davis has subverted standard expectations of a film score to create something that unconsciously works on the viewer. That is the beauty of minimalism. I still get a shiver every time I heard the opening chords to the score. This is film music that we will be holding in regards with the best of Williams or Korngold.