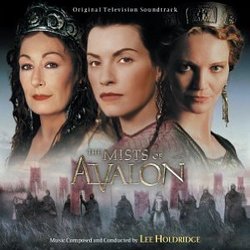 The Mists of Avalon

Review: Mists of Avalon, The

If you're looking for a soundtrack that tells you a story without copping out by including dialogue sound bytes, this is the soundtrack for you. Sure, the track titles pretty much give away the plot, but the music does such an elegant job that the tracks could be named One, Two, Three, etc. and you would still understand it.

Launching you head first into the pagan world that is The Mists of Avalon is the opening track, "The Mystic's Dream" by Loreena McKennitt. McKennitt is the same voice that had a Top 40 hit with her tune, "The Mummer's Dance" several years ago, a pop song pregnant with Celtic vibe.  Immediately after that introduction, we launch into Lee Holdridge's wonderful score.  It begins with "Morgaine's Journey" which contains a major theme for the film, played each time there was a cut to Morgaine (Juliana Marguiles) floating through fog towards Avalon while her voiceover filled the audience in on the story.

In the film, when Igraine (Morgaine's Mother) meets Uther Pendragon (who is not her husband at the time), the music starts out festive and jocular. As soon as Igraine sees Uther, the music gets a kind of mysterious overcoat that spells out t-r-o-u-b-l-e. Even though they're only chatting, when Igraine's husband shows up in the scene, Uther seems nonplussed, but Igraine starts acting all guilty.

Speaking of guilty, Vivienne has tons of explaining to do later on in the film with regards to "The Cave Ceremony". The ceremony involves Morgaine being given to some specific hunter and the two participating in fertility rituals without ever knowing whom the other person happens to be. Holdridge really does a great job here, the music very obviously belongs in some sort of pagan ritual, but it's heady and primal and almost spooky.

"Mordred Confronts Arthur/The Battle Ends" reminds me heavily of Excalibur and Henry V, though I suspect that's mostly due to the enormous armies and foggy, muddy battlefields. The score in the battle scenes plays its role as background beautifully in the film. It's audible, obviously, but the audience is able to remain focused on the action in the film and the characters; the score doesn't distract attention away from the story.

That lack of distraction from the story is what I think makes the score for The Mists of Avalon a perfect soundtrack. Played within the context of the film it doesn't keep an audience from following the story; yet, if you listen to the soundtrack on its own you get incredibly gorgeous music that calls the story back up. It's a "can't have one without the other" situation that works really, really well.

English songwriter Aeone wrote lyrics to Holdridge's music, and produced and performed the last track on the album, "I Will Remember You Still". The song doesn't actually appear in the film anywhere, though she is also the lone female voice heard throughout Holdridge's score. You might think the song had been part of her catalogue and simply chosen for the film, but aha! You're wrong!  In the four minutes of the song, Aeone's voice floats through beautifully moody and ethereal lyrics that sum up The Mists of Avalon. That is, these stories will continue to thrive so long as they're remembered. And this score is not something to be easily forgotten.