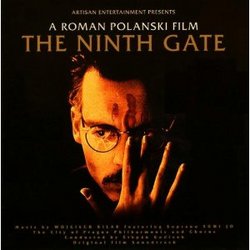 To me, music and theology go together, and Wojciech Kilar's score for The Ninth Gate is one of those items that gets me wondering.

Built around the film's moldy premise of conjuring Old Gooseberry, Kilar somehow manages to be less predictable and obvious in his scoring approach; the music is more seductively off balance than altogether scary. The idea that satanic music must be overtly repulsive stems from the view that Satan is the opposite of God, or perhaps Christ, and if viewed from this Christian stance Satan is the depraved and fallen angel God cast down from heaven, not a timeless evil or a fallen deity. So contrary to the film's advertising, there is no religious duality; no power can achieve the perfect badness needed to oppose perfect goodness, for if one were to take away every good gift (intelligence, free will, nature, energy, life, etc.) there would be no remains. Correspondingly, evil rarely appears with a placard bearing the words, "I am Evil!" Given the thought that Satan and his minions are angels whose natures are deprived, it stands to reason to represent the horror with a tonal theme that is forfeited, rather than the atonal or dissonant themes common of films dealing with matters of hell.

Wojciech Kilar gives us these corrupted themes. With a gothic lilt for strings, harpsichord, piano, and the vocal aerobics of soprano Sumi Jo, the "Vocalise - Theme from The Ninth Gate" is an especially supernatural track. The undulating "Opening Titles" is an elegy for strings that pushes the macabre atmosphere along similar lines. There is also an unconventional, snide bolero to provide the soundtrack with regular dark humor. But the spoiler-titled track (take warning immediately!) "Balkan's Death" introduces the highlight of the album, a magnificent The Omen choral chant set against the wailing of Sumi Jo, and two cues later the pulsating terror frenetically reappears in the unpleasant finale. It is devilish to the nth degree. The more typical horror devices, such as piano "stingers" and snarling sounds from the orchestra's lower registers, are not too distracting. However, there are scattered instances of desultory pacing, where the music, like a merry-go-round, seems to be trying to go somewhere but must become a very different thing if it is to ever achieve the goal.

The soundtrack overall, competently performed by The City of Prague Philharmonic Orchestra and Chorus, bears well alongside Kilar's most popular score to Bram Stoker's Dracula, and further evidences that this composer could easily tackle the upcoming Lord of the Rings. [ed. - Kilar has not been signed to this film, but there were rumors he was being considered.] But here is a near-excellent recording for this precise moment. The album production is reasonably standard, but includes reproductions of the nine creepy etchings central to the motion picture's story.