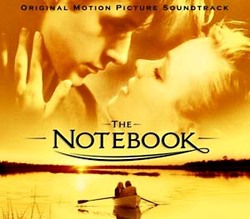 When it comes to romantic scores, I'm a real pansy. From the beautiful glowing strings of John Barry to the heart-wrenching melodies of Georges Delerue or the melancholy of Ennio Morricone, a good old fashion "love story" score can turn me into a sobbing thirteen year old girl after a viewing of Titanic. Let's just say that my expectations for The Notebook score were high.

Aaron Zigman is new to the film composer scene with John Q being the only other feature film under his belt. After listening to this score, it is apparent that we will be hearing a lot more of his music in the future. The Notebook is beautifully orchestrated with a nice theme thrown into the mix. I do have a problem with the album though: there isn't enough score! Out of 15 tracks, seven of them go to 1940s oldies. This is all fine and well in the film, and helps capture the spirit of innocent love in the 40s - but I'm a movie score nerd who wants to listen to some film music! That quibble aside, let's talk about the score.

"Main Title" introduces the main theme with a piano solo. The theme is pleasant but it took me a few listens before I could hum it from memory. To me, "Overture" is the highlight of the album. Zigman creates a lush and sweeping variation of the theme utilizing the full orchestra. This is the kind of music that propels a simple love story into epic mythos. "Allie Returns" opens with a soft flute and string melody later accompanied with the rest of the orchestra to once again create that lush romantic sound. Also introduced in this track are some tragic elements that are later to come in the score. "House Blues / The Porch Dance / The Proposal / The Carnival" opens with a 1940s mono-track sounding swing tune. Around 1:40, the score turns into an all out blue grass country festival. At the 3:20 mark, the music goes back to 40s jazz swing. Not having seen the film yet, I can only assume that Zigman composed this music as background source material.

Tragic elements return in "Noah's Journey" which begins with a gloomy jazz motif and then moves into the romantic sweeping strings with clarinet. Following that, a poignant solo piano relaxes its way into the piece and then the strings once again take over - very tranquil stuff. Another favorite of mine is "On the Lake" which opens with a grand crescendo of the main theme and slowly moves into slow strings and piano to aid the tragic undertones of the film. "Our Love Can Do Miracles" closes the score with a reprise of the main theme in its lush and sweeping form but in a bittersweet fashion.

I believe that if the album contained more of Aaron Zigman's score, it would be a near-perfect disc. Unfortunately, the score material that is included isn't enough to get the big picture. Although the music on the disc is good, it feels drastically underdeveloped. What we get is a little taste; a taste of things to come in the bright future of Aaron Zigman.