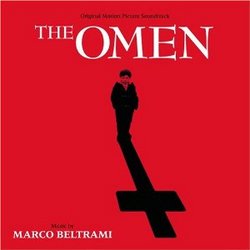 There are certain films, even classics, which could be updated with a new version and still have relevance to an audience. Of course, these examples are few and far between since most often the original is a classic for very good reasons and does not need any improvements or re-interpretation. I personally would place Richard Donner\'s The Omen in this category and thus it was a surprise when this modern update was rushed into production, seemingly only to cash in on the planned release date of 6/6/2006, a date that inexplicably disturbs some people. The new Omen, starring Liev Schreiber as Ambassador Robert Thorn and Julia Styles as his wife Kate, features a score by Marco Beltrami, a former student of Jerry Goldsmith, who as we all know won an Oscar for the original 1976 version.

The "Main Title" opens effectively with a sense of dread, through low, guttural contrabassoon, chimes, subdued timpani and descending melodic line. An urgent string ostinato then bursts forth, enhanced by clacking percussion, choir and that descending motif, followed by a quiet coda where we hear the chorus intone Latin phrases from the famous "Ave Satani" composed for the original by Goldsmith. "The Adoption" opens in a hesitantly optimistic tone through mid-range strings, harp and chimes, featuring a mysterious 3-note motif, possibly in deference to Goldsmith\'s love theme, which began in a similar manner. Some lovely melodic material for flute, clarinet and strings follows.

"Ambassador Gets Fired" is an effective cue, beginning with wonderfully ominous use of vibraphone and bass clarinet, quite reminiscent of Goldsmith, in a wavering 2-note motif soon picked up by staccato strings. Another lovely setting for flute and strings is heard in "New House / Damien\'s Deliverance", but the mood shifts to low tones, clacking percussion and the choir breathing heavily in the background. "The Nanny\'s Noose" underscores a scene straight from the Donner film, where Damien\'s caretaker hangs herself from the family\'s house, the cue starting with the 3-note motif and ending up in a bold stinger of low brass and swirling strings.

As the score progresses through moments of suspense and dread, Beltrami does an impressive job of utilizing the orchestra in a pointed, specific manner as his mentor did, effectively paying homage to the 1976 original and also setting itself above and apart from what passes for music in today\'s horror films. "Daniel\'s Tantrum" and "More Tantrums", for example, each feature elements that would have made Goldsmith proud, from shifting choral textures and nervous string accents all suddenly exploding into a staccato fury, chattering trumpets, unnerving synth effects and more whispered text from "Ave Satani" ("corpus edimus"). Later, a solo piano in "Kate Doubts" gives a brief ominous hint at Goldsmith\'s theme.

The lengthiest track is "On the Heels of Spiletto", which initially revisits the string ostinato heard in the "Main Title", along with moments for low flutes, chimes and choir, somewhat reminding me of textures Goldsmith used in The Final Conflict. A sense of dread pulls the track inexorably forward. "Dogs in the Cemetary" covers a sequence which was a high water mark in the 1976 version, where Goldsmith took his score to a frightening new height in a powerful showcase. Beltrami could not hope to match it, but his attempt is still a good, bellicose, energetic piece of terror. "Drive to Bugenhagen" is an example of the differences in the scoring techniques of today compared to thirty years ago, when the same scene was presented. The film has Thorn seek the character named Buganhagen on an archeological dig in the Middle East. In 2006 the immediate instinct is to utilize Middle Eastern instrumentation, including a wailing female vocalist, to emphasize what is already evident on screen. With Goldsmith, no attempt was made to delineate geography by instrumentation, as it would be in stark contrast to the musical tools heard throughout the rest of the score, namely the Western orchestra and choir.

"Dirty Deeds" opens in an atmospheric manner, featuring a deliciously mysterious harp and vibraphone combo before pounding percussion bring the horror to the forefront. "Altar of Sacrifice" features a brutal, vicious flurry of activity – staccato trumpets, shrill winds, stabbing strings and xylophone accents, a great climactic cue then leading into the 3-note motif developed effectively in a tragic tone on solo piano in "The Funeral". Material from the "Main Title" is recapped in "Boy Genius", but with added choir, brass and percussion elements. The album then closes with a grand, re-recorded suite of music from the original, titled "Omen 76-06", and in retrospect it is interesting to note that much of Beltrami\'s material sits rather well alongside Goldsmith\'s, due to the similar use of instrumentation and orchestration. Not simply through a mix of standard orchestra and choir, but allowing a sense of transparency to it all, where solos can emerge, whether on flute, piano or harp, and comment on the story. Sheer noise is not required for the score to be at the forefront as sometimes a whisper can be more alarming. One could argue that an update of The Omen was not really required but regardless it has resulted in an enjoyable, engaging effort from Beltrami and a highlight for 2006.