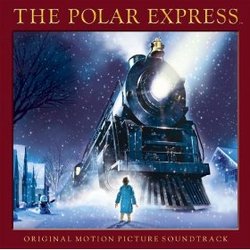 The pairing of Robert Zemekis and Alan Silvestri represents one of the most acclaimed and seasoned director/composer duos in the entertainment industry alongside Steven Spielberg and John Williams. After Silvestri's minimal contribution to Cast Away, he comes back for Zemekis' next project with power. Writing along the lines of Alan Menken's work for Disney in the early 1990's, Silvestri not only provides a breathtaking score for the visually stunning Polar Express, but also lends a hand to the numerous songs that accompany the film.

The album opens with six songs written by Alan Silvestri and Glen Ballard for use in the film. Two of these songs are performed by Tom Hanks as his character in the film, "The Polar Express" and "Hot Chocolate." Both are upbeat, jazzy songs and fit in well with the celebratory tone of certain scenes in the movie.

Along the same line is "Rockin' on Top of the World" performed by Steven Tyler (who makes a smirk-inducing cameo in the film). The other three of these songs feature Silvestri's themes for The Polar Express. "When Christmas Comes to Town" is a slow duet performed wonderfully by two children soloists, Matthew Hall and Megan Moore. "Believe" is a song written to Silvestri's main theme. From the sleigh bells in the background to the hopeful lyrics sung emotionally by Josh Groban, it is a perfect song for the holiday season. "Spirit of the Season" features a large choir in classic Christmas carol style.

Silvestri's score, though featured in only two tracks, is phenomenal and worthy of an Oscar nomination. Not since John Williams' Home Alone scores has a composer captured the magic of Christmas so well. "Seeing Is Believing" is a magical cue with a full choir, backed by bells and soaring brass lines, which concludes with orchestral renditions of classic Christmas standards such as "Jingle Bells and "Deck the Halls." The rest of Silvestri's score that appears on the album is locked up in "Suite for The Polar Express," which begins with the "Believe" theme, but contains full orchestral performances of all his themes from the songs. The cue brings the album to a brilliant close with a second, more powerful performance of Believe with a countering horn line and choir thrown in.

The rest of the album is a mix of old Christmas tunes performed by Frank Sinatra and the like; basically, the classics you hear playing every Christmas day on the radio. While great songs, they do not add anything to the soundtrack, which captures the spirit of Christmas so well without these unnecessary songs. Like any Menken musical production, the album would have benefited by including more of Alan Silvestri's score. I can only hope for a score release. These six oldies songs do not even fit in with the rest of the new music, as they sound muddled as if recorded off a worn-out record. One only has to hear the last minute of the suite of Silvestri's score to long for more.