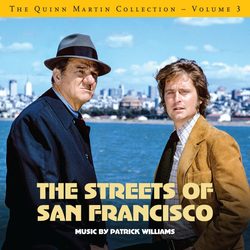 The Quinn Martin Collection: Volume 3 - The Streets of San Francisco

Remastered from original Quinn Martin Productions elements, this thrilling compilation of original music from the beloved cop drama series presents stellar work from composer Williams, featuring his astounding pilot score and nine additional episode scores. All the drama and excitement of The Streets of San Francisco can be found in Williams' swinging orchestral soundscape. Featuring some of the era's finest musicians under Williams' jazz expertise, this dynamic music provided the series with irresistible energy and bounce ¢ and the composer would do the same with his episode score from A Man Called Sloane (1979), which was to be the last Quinn Martin series. Produced for La-La Land Records by Jon Burlingame, and transferred and mastered by Doug Schwartz, this deluxe 2-CD set is limited to 2000 units and will thrill not only Streets fans, but also classic TV and score enthusiasts of all ages. The exclusive, in-depth liner notes are by producer Burlingame, and the arresting art direction is by Dan Goldwasser.