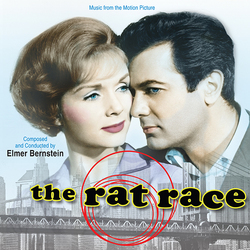 Right from the get-go, Elmer Bernstein's electric, jazzy, and spectacular theme grabs you and never lets go. That theme recurs throughout the score—pulsing with the teeming life of the city, with wailing brass and insistent rhythms. Some cues keep the big-band jazzy feeling, while others are mournful and tender, as the story requires. It is, simply put, one of Bernstein's best.

Nobody did this kind of score better than Elmer Bernstein—it's just filled with memorable melodies and stunningly gorgeous music. 1960 was a great year for Bernstein, what with The Rat Race and then one of his all-time masterpieces, The Magnificent Seven. The theme from The Rat Race enjoyed some popularity and radio play when it was recorded by cast member Sam Butera and the Witnesses.

This is the world premiere release of The Rat Race original soundtrack recording. There was an LP release of the Sam Butera version of the theme—an album called "Sam Butera and the Witnesses play the Music from The Rat Race," but it was just the theme; the rest of the album was filled with standards.

The original tapes, housed in Paramount's vaults, were in excellent condition and we present Bernstein's score in its entirety in stereo. In the bonus section we've included some mono source cues (all by Bernstein) and a couple of demos.