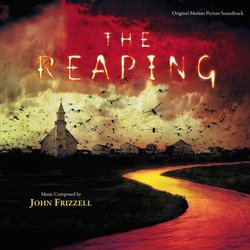 John Frizzell is no stranger to the large scale, science fiction-based horror genre, but he even turns up the epic scale for the Joel Silver-produced biblical plague film, The Reaping, starring Hilary Swank. While his other horror projects with Dark Castle Entertainment (Thirteen Ghosts, Ghost Ship) took a rhythmic, dark orchestral tone, he switches the focus of The Reaping to epic choral in the vein of Goldsmith\'s The Omen, especially in the cue "The Locusts". For the score, Frizzell employed an 80-piece orchestra and a 60-voice choir, which performed in Gaelic in contrast to the Latin lyrics in The Omen. I suppose Hebrew or Egyptian would have made more sense, but the use of Gaelic is simply for the sound rather than any meaning, in contrast to the Aramaic in Debney\'s The Passion of the Christ.

The main theme for The Reaping is introduced in a piano solo in "The Call from Costigan". This theme is used frequently and in many variations. Its introduction is quiet and almost delicate in stark contrast to its use in "Katherine Reaches for Lauren", which features the theme in the strings backed by the choir. The notes from this theme were also built into a wind chime that is used periodically throughout the score ("River of Blood", "Katherine Encounters Lauren"). The theme is also used in a sweeping, orchestral version that is featured in quieter moments for Swank\'s character, as heard in "Katherine\'s Faith". Two additional themes are introduced in "Trip to Haven". The first is in the strings and takes on a very ominous tone with a melody reminiscent of Brian Tyler\'s theme for Frailty. The second theme follows on the heels of the first and is performed on the piano. This third theme is heard again in "Katherine Encounters Lauren".

The first appearance of the choir follows a quiet, ambient moment in "River of Blood". Like this track, the best cues are those specifically relating to plagues. "Plague of Flies" begins with a loud orchestral cue followed by the main theme in the piano, backed by sizzling electronics. "Livestock" features the choir beginning to take over the main theme in this quiet, but tense cue. The choir finally begins to become an entity of its own and the Gaelic lyrics become prominent at the end of "Katherine Believes/Costigan Burns". This continues in "Locusts", a frenetic choral piece with racing orchestra behind it. The second theme appears in "Ben is Dead/The Confrontation", a descending motif in the strings that gets backed by the choir at the end of the cue. The choir returns to the forefront in "God Intervenes", which leads into the finale cue, "The Boy". This cue features new statements of the main theme in a rushed string section, a statement of the third theme in the solo French horn, followed again by a new version of the main theme. The full, epic scale of the score is unleashed in this cue and is easily the highlight of the album.

There are a lot of theme statements I did not mention, because they are frequent and in many different forms. This score is very subtle at times and takes a few listens before the themes are really even apparent. "The Boy" begins to end with a nice soprano chord, but then becomes dissonant, leaving the score with an uneasy feel. The album closes with "The Reaping Title Sequence", which is the main theme performed under rock-electronics and a strange mix of the choir. This score probably slipped under the radar because the film didn\'t do very well, but Frizzell should be recognized for the subtle, yet layered texture of the score\'s orchestrations and interweaving of a number of themes. I would say that fans of Frizzell\'s past horror scores will like this one, but even if you haven\'t, this score is one many fans of film scores will enjoy if you are willing to really concentrate on it. Some fans were disappointed because Frizzell was brought in to replace Philip Glass, but that does not take anything away from Frizzell\'s score.