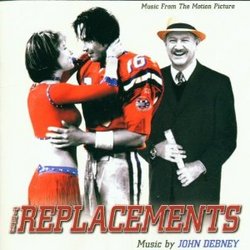 The Replacements was a slightly amusing film about a major league team who gets a whole slew of out of shape, unruly replacement players when the real players go on strike. Coming on the heels of another football film, Any Given Sunday, the film required a high-octane rock score, and surprisingly enough, John Debney delivered just that.

Beginning with "The Replacements Remix," an almost six-minute long recap of most of the themes in the film with a pulse pounding techno rock beat, synth elements, and dialogue from the film. It got my foot tapping, and that was a good sign—not once did I find the hard-techno elements to be annoying, as I find they can be sometimes. After a few songs, including "Bust A Move" by Young MC and the classic "I Will Survive" by Gloria Gaynor (as seen in the trailer, everyone knew this song was going to be a big part of the film's soundtrack), we have a few more score cues.

"The Dallas Game" is a hard-hitting cue with tense string-work, and a driving rhythm. It reminded me a bit of Mark Mancina's work on Bad Boys, and it was a pleasure to listen to. "Falco" is a soft orchestral cue, which contains the film's softer emotional core. Strings and woodwinds play a calming version of some of the themes we heard in the "Remix" cue.

Adding to some of the confusion of the score cues is the mixing of the orchestral / rock / techno stuff with some score that was composed by Debney, but performed by the group Font 48. Their performances are highly energetic and well done, but seem to be different enough from the other score cues that they stick out a bit. After a score cue ("Wild Yam") meshes into a song ("The Look In Your Eyes"), I got the feeling that the tracks could have been broken out a bit better—fter all, there wasn't much of a transition, it just went into the song after a minuscule pause—that should have been a track break.

The use of the seminal classic "Rock and Roll Part II" by Gary Glitter would have been a nice way to end the album, but there are two more score cues, thus begging the question to the track order. Why were the songs all mixed in with the score? Could they have been broken out and separated? Would it have made any difference? Probably not. But in a bizarre twist, after the last cue ("Martel Crossed") ends, there is actually another pop song on the album. It's not credited anywhere, and it's not on it's own track. I suppose it's just another hidden track (as Varese seems to have been doing lately), and that's fine by me—but it should have gotten it's own track.)

The album runs one hour long, and is a nice mix of orchestral-techno-rock, and a range of pop songs. Should you get it? Depends how you're feeling. It's nothing to run out and buy, but if you happen to like any of the pop songs on the album, or are curious to hear Debney successfully score a style that I would never have pegged him for, definitely check it out.