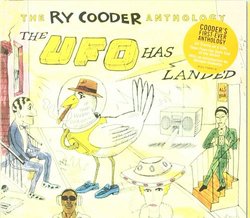 The Ry Cooder Anthology: The UFO Has Landed

Spanning 1970-2008, the unprecedented 34-track set collects stand-outs from Cooder's prolific output as a solo artist, collaborator and soundtrack composer, and also debuts one previously unreleased track. Overall, the double-disc retrospective takes an existential joy ride through the repertoire of a musical visionary that Rolling Stone recently ranked #8 on its list of "The 100 Greatest Guitarists Of All Time."

The UFO Has Landed: The Ry Cooder Anthology was assembled by Ry Cooder and his son Joachim Cooder. They juxtaposed songs recorded during different phases of Cooder's career to present a vivid new portrait of the artist and his incomparable body of work. The collection reaches back to Cooder's self-titled 1970 debut LP and up through his acclaimed 2008 album I, Flathead, with memorable cuts including: "Maria Elena," "Jesus On The Mainline," "Boomer's Story," "I Got Mine," "Available Space" and "The Very Thing That Makes You Rich (Makes Me Poor)."

Along with his solo work, the anthology gathers selections from the more than 20 original motion picture soundtracks Cooder has composed, with featured highlights including: "Jesse James" (from The Long Riders), "Feelin' Bad Blues" (from Crossroads), and "Paris, Texas," from the acclaimed Wim Wenders' film of the same name.