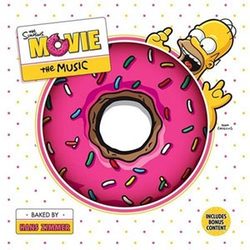 I must admit that when I read Hans Zimmer had been signed as composer for The Simpsons Movie, I felt a bit bad for Alf Clausen and yet understood why the decision was made. One could argue that Clausen\'s music for The Simpsons television series, even in its briefest statements, is perhaps more the soul of the series than even Danny Elfman\'s famous title tune. Over the years, Clausen has had to accentuate, augment and play against so many thousands of absurd and sincere scenarios, punctuate so many visual gags, that I thought it\'d be wonderful to hear his contribution stretch out on the big screen. But since Clausen still has the series itself to score, producer James Brooks often goes to Zimmer for his films and after listening to the The Simpsons Movie album, I feel that Zimmer did a pretty good job in his own right.

It opens appropriately with Elfman\'s series main title, performed by a very large orchestra in suitable celebration of the grand theatrical upgrade. Following this is "Trapped Like Carrots", a bustling cue featuring Zimmer\'s sprightly new main theme for the film, which seems loosely based on Elfman\'s, a few notes here and there and similar phrasing, working well in this context. Funny enough, it emerges as a tune Bart might whistle absent-mindedly as he slides down the stair banister. "Doomsday is Family Time" opens with a more sweetly charming statement of the theme, essayed on piano and flute with strings swaying, a nice respite before the unexpectedly raucous, grungy, surf-rock tone of "Release The Hounds", a great track. "Clap For Alaska" begins with a grand, mock-serious inspirational cue for orchestra and choir before scaling down to woodwinds and strings, while in "What\'s An Epiphany", Elfman\'s theme is led through several variations and the track itself carries an overall Elfman vibe, due to instrumentation, some of the harmonic language and mischievous nature.

Elfman\'s theme is granted an even broader canvas in "Thank You Boob Lady", heard first in an exciting mold, and then later moving into more sweeping statements and variations. The lengthiest track, "You Doomed Us All… Again", surprisingly contains some of the most sensitive writing of the album, with a lovely, delicate, slightly melancholy new secondary theme featured in a flute and piano duo, but soon the tone shifts to menacing, martial brass and percussion, a steady ostinato and some rapid action, based back on Zimmer\'s main theme. "…Lead, Not To Read" returns to shades of energetic Elfman in its bongos, upper register strings and female choir and bright brass, plus a bold statement of his Simpsons theme, capped off by a propulsive finish and dovetailing directly into Zimmer\'s homage to Copland, "Why Does Everything I Whip Leave Me?" (the homage being musical, not the question asked in the track title). It\'s a great, rousing track, still referring back to Zimmer\'s theme in big brass exclamations.

"Bart\'s Doodle" probably could have been scored in any number of ways, but Zimmer chose hilariously chirpy, 40\'s style female vocalists, "La-De-Da"ing along in a blissfully ignorant fashion, not unlike how Elfman scored Nicole Kidman\'s character in To Die For ("Suzie\'s Theme"). The most extensive and expansive treatment of Zimmer\'s theme occurs in "World\'s Fattest Fertilizer Salesman", as pizzicato strings percolate and the theme moves from low woodwinds, mid-range piano and onto larger orchestral variations, broken up by a lumbering, waltzing section in the center. It\'s even got the signature "descending swirling strings" that Elfman has been known to employ. "His Big Fat Butt Could Shield Us All" moves back to gentle scoring for harp, acoustic guitar, winds and strings (sort of the Good Will Hunting instrumentation) in its first half while the second half features sweeping orchestral gestures, shifting between Elfman\'s and Zimmer\'s thematic material. "Spider Pig" is an amusingly large-scale choral rendition of a tune written for the film, based on the old TV series Spiderman theme everyone knows. Finally, "Recklessly Impulsive" is a techno remix of Zimmer\'s material – fun for a bit, probably could have been half the length.

I do not think it is a slight against Zimmer to note the Elfman-esque qualities in this score, as they are appropriate and do not specifically borrowing anything from him except harmonic and instrumental qualities. Plus, Zimmer has created a very enjoyable album which covers not only the devilish and manic nature of the series, but also that more difficult quality to highlight, that of the bond between the Simpson family members. It has always been scored by Clausen from a sweet and genuine approach, but never saccharine or overwrought and here Zimmer rides that fine line perfectly in such tracks as "Doomsday is Family Time" and "You Doomed Us All… Again". And yet, the Zimmer flair is still present at times, never overshadowing what the film required, making for a colorful amalgamation of the differing styles. When 2007 began, I never thought that the two scores I would most greatly enjoy thus far would be Zimmer\'s Pirates of the Caribbean: At World\'s End and his accomplishment with The Simpsons. D\'oh, indeed!