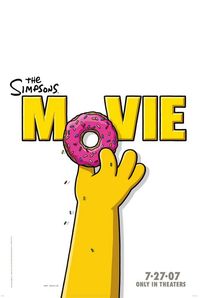 It\'s been 18 years in the making, but Springfield\'s very own Simpsons have finally gotten their own feature film. Unfortunately, The Simpsons Movie is more like a lengthy television episode, begging the question as to why it took so long to deliver something so ho-hum, and after all the hype and build up, is this really the best they could do? The rather simplistic plot involves Homer polluting the lake to the point where the EPA decides to encase Springfield in a dome, leading the townspeople to go after the Simpson family, who escape to Alaska. When it\'s revealed that more dire plans are in store for the town, will the family be torn apart due to Homer\'s stupidity, or will they all come together to save the city? If it sounds like your average episode, then you\'re probably right - it\'s just three times as long, is the only difference.

From the opening of the film (with Ralph Wiggum standing in the Fox logo singing along with Alfred Newman\'s classic fanfare), which starts off with the Simpsons watching the \"Itchy & Scratchy\" film and wondering why they paid to see something in the theater that they could watch on TV for free, the audience is treated like a television audience until the final credits begin to roll. Sure there are some funny jokes and moments that garner plenty of laughs - but none of it truly felt fresh or inspiring. Where \"South Park\" made the transition to the big screen and delivered a truly cinematic experience with South Park: Bigger, Longer and Uncut, The Simpsons Movie just feels like an episode that goes on for too long. It never feels like it earns the price of a movie ticket, doesn\'t really deliver anything that couldn\'t have been seen on television (except for Bart\'s full frontal nudity, and some \"harsh\" language from Marge, I suppose).

Also like the television show, the music score - this time provided by Hans Zimmer - is mixed so low as to be almost imperceptible. The main title theme by Danny Elfman is edited up in the film to allow for a cameo performance by Green Day (an admittedly funny moment at the start of the film), for the most part the music is buried in the film. A funny on-screen song like \"Spider-Pig\" makes an edited appearance as well, but isn\'t allowed to shine until the end credits.

It\'s been a long time coming, and with the advertising blitz in full force, you\'d think that they would have delivered something worthwhile. Instead, The Simpsons Movie is good for a few laughs, but is probably best seen on DVD. In the meantime, turn on the television any day of the week and watch some classic episodes - you\'ll probably have a better time, and you will save money in the process.