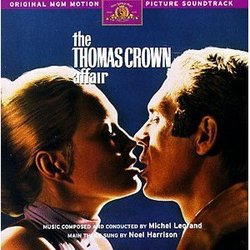 I've been collecting Steve McQueen movie soundtracks for a while (from The Great Escape to Bullitt, etc.) and was more than ready to add this one to the old collection. It was brought up on Film Score Monthly's site that folks have had a hard time finding pieces by Michel Legrand, which is true, since this composer has been mostly known for doing films in his native France (We even have him singing on this release... odd stuff... a Frenchman straining to sing in English.. "oui!"). The film's score is punctuated with the theme from the title song (a hit back in 1968), "The Windmills Of Your Mind," but switches to a rather abstractionist scat jazz approach that leaves something to be desired if you're looking for cohesion (but it's damned interesting to listen to) and then sways into a more traditional sixties/fifties swing/bop. In short, it's all over the map. (Hey what do you expect for a love-story-come-jewel-heist based film?) All I can say is that if you liked 60's film music (yes, lounge music, too.), this would be a catch-all candidate.