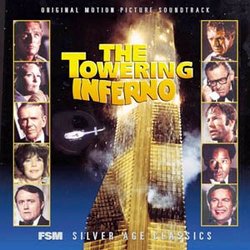 After the success of The Poseidon Adventure, producer Irwin Allen gained a reputation of being the "Master of Disaster".  I remember back in Boston, many years ago, one of the UHF channels featured a "Disaster Week" film series, and almost all of the films were Allen's.  So anyways, after The Poseidon Adventure came The Towering Inferno.  A mega-production in countless ways, it featured an all star cast and ran a hearty 2-hours and 45-minutes in length.  It exploited every major phobia, from drowning, to falling to your death, to suffocation, to being crushed, and in the end garnered eight Academy Award Nominations, winning three of them.  The score by John Williams was one of those nominated, and would serve as a hint of things to come in his career both musically, and successfully.  Recently, Film Score Monthly released the score to The Towering Inferno as part of their Silver Age Classics series of releases.

The main theme to The Towering Inferno is heard right off the bat in "Main Title" - a dramatic four-note motif (known as the "rescue motif") quickly builds up with the orchestra as the more accepted modern "John Williams sound" comes to life.  Heavy on the brass and strings, it's a fanfare that is reminiscent of work he would do in the future.  Some of the cues are jazzy and relaxing ("Something for Susan", "Lisolette and Harlee", "More for Susan", "Harlee Dressing"), while others are a little more tense ("The Flame Ignites", "Not a Cigarette", "Down The Pipes / The Door Opens") as the building catches fire.  Maureen McGovern's performance of "We May Never Love Like This Again" is wonderful and stylistically similar to "The Morning After" from The Poseidon Adventure.

The last half of the score is more dramatic fare, as the people trapped in the building try to make their way to safety.  Ominous flute and strings underscore "Down the Pipes / The Door Opens".  "Helicopter Rescue" is a more optimistic cue that interestingly enough wasn't used in the final film. The tension really begins to rise in "Planting the Charges", a nine-minute cue that showcases Williams' scoring abilites, and can clearly be pointed to as one of the "ancestor" cues that eventually led to the style of scoring he used in Jaws and Star Wars.

No Film Score Monthly release would be complete without a few bonus tracks, and here we get the album version of "We May Never Love Like This Again", a source instrumental of (ironically enough) "The Morning After", an album arrangement of "Susan and Doug", and three "damaged" cues.  I have to say that the sound quality wasn't that bad on the damaged cues, and they could have been placed within the context of the rest of the album and still retained their impact just fine.

1974 was the year when John Williams did his first film for a young director named Steven Spielberg (The Sugarland Express).  It was too soon to say where that collaboration would ultimately lead, but as we all know to call it extremely successful would be an understatement.  Williams also did another disaster film that year, Earthquake (not for Irwin Allen), but it's The Towering Inferno that got him an Academy Award Nomination.  That alone should convince you to get this album, but if you need more motivation, consider that the 76-minute long album has detailed liner notes, and relatively good sound quality.  I'd have to recommend this one, and I don't think you'll be disappointed.