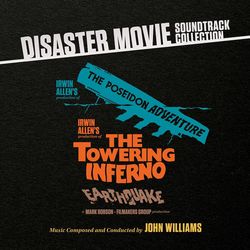 Prior to the deep-water predator threat of Jaws and the outer space spectacle of Star Wars in 1977, maestro John Williams lent his sizable talents to that decade's first half by composing breathtaking scores to the '70s' most prominent and epic, star-studded, force-of-nature disaster spectacles, notably The Poseidon Adventure, The Towering Inferno and Earthquake. This spellbinding collection showcases Williams' musical mastery in deluxe fashion, featuring improved sound over previously released editions, and in the case of The Towering Inferno and Earthquake, expanded with previously unreleased material. Produced, restored, mixed and mastered by Mike Matessino, this limited edition set is comprised of four discs, spread across three separate jewel cases (one jewel for each score) - all housed in an attractive slipcase. The exclusive, in-depth liner notes are by writers Jeff Bond (Poseidon, Inferno) and Jon Burlingame (Earthquake) and the thrilling art direction is by Jim Titus.

The Poseidon Adventure and The Towering Inferno scores are presented in association with the Irwin Allen estate. Poseidon has been restored and meticulously remastered from original vault materials for improved sound over previous releases, and features a reordered program of the movie's source music and songs, now including the hit Maureen McGovern single version of "The Morning After." The 2-CD Towering Inferno presentation is a major restoration project, sourced from 20th Century Fox, Warner Bros. WEA and Allen estate materials, and is the most comprehensive and best-sounding representation of this amazing score to date. Disc 1 showcases the original score presentation, while Disc 2 features alternates, source music, and the first official CD release of the 1974 soundtrack album master.

The Earthquake score, sourced from Universal Music Group and Universal Pictures elements, features a fully remixed and remastered presentation of the 1974 soundtrack album recording, and – for the first time – the world premiere of the original film score recording.

This composer-approved collection is limited to 5000 units and is a must-have for all film music enthusiasts. These are legendary Williams scores, preserved and presented in a most worthy fashion.