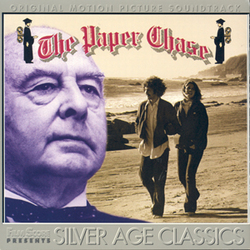 The Paper Chase / The Poseidon Adventure

by Dan Goldwasser June 23, 2001
0 / 5 Stars
Film Score Monthly has released their second "Silver Age Classics" CD - and it certainly delivers! Not one, but two - yes, two scores by John Williams are presented for the first time on CD: The Paper Chase, and The Poseidon Adventure.

John Williams' score to The Paper Chase is almost a lesson in schizophrenia. Some cues are so simple and straightforward ("Love Theme") that you can't help but admire the fact that they work so well as themes and musical pieces. Others are not so lucky. The inclusion of source music ("Kevin's Tutor") is nice, but listening to it is sometimes near to impossible. I found myself skipping the source tracks more often than not.

The main theme that Williams wrote for The Paper Chase is a simple one, and sounded very familiar. I dare say that I may have heard the theme before would in an elevator - it has that quality. But this is John Williams in the early 1970s - before he became the large orchestral genius we know and love today.

However the focus of this CD - and rightfully so - is the first official release of Williams' score to The Poseidon Adventure. With a running time of 39 minutes, this seems to be the most comprehensive release of the score to date. The bootleg which until now was the only thing available also has a running time of 39 minutes - but includes the 2.5 minute long song, "The Morning After".

I have not done a track-to-track comparison of this CD and the bootleg to see which has more music (both have different track number and track times) - but I think it is a safe bet to assume that this CD has more music than the bootleg. Unfortunately, the quality of the source tapes used for this official release doesn't seem to be much better than the tapes used for the bootleg - with the exception of the two stereo tracks, which appear to have a slightly higher fidelity.

Sorely missing from the CD is the song "The Morning After," which I always think of when I hear the words "Poseidon Adventure." But it probably would have cost a fortune in licensing fees, so I will be grateful for what we do have - and that is a wonderful double album with two early scores by John Williams.

As an extra bonus, the main title to Conrack is tucked in between the two scores, and is a nice little extra that does not go without notice.