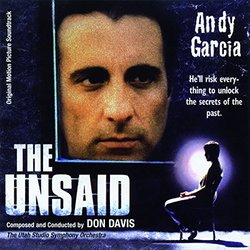 Don Davis stepped into the film score limelight with his two sequel scores in the Matrix trilogy. Writing a postmodern score from The Matrix into the epic-scale Matrix Revolutions, Davis showed his skill for composing in varied genres. Between the 1999 release of The Matrix and the one-two punch of Reloaded and Revolutions four years later, Davis took on a load of other projects, including Jurassic Park III. Additionally in 2001, Davis scored the straight-to-video film The Unsaid, starring Andy Garcia. In 2004, his music finally saw an album release from Prometheus Records.

Vastly different from the large orchestral feel Davis used in the Matrix trilogy, Jurassic Park III, and Warriors of Virtue, The Unsaid is a quiet score that features piano, strings, and woodwinds, but is also strengthened by Davis' main theme, which he puts to good use. This theme is introduced on the piano in the "Main Title" and is widely used throughout the score, often performed beautifully by an English horn. One of the strongest parts to this score are the chord progressions between the piano and strings in a similar style to some of Brian Tyler's work, such as Frailty or Godsend. However, between the performances of the theme, there are large spaces of filler music with solo piano notes that slow the pace down dramatically ("Tommy Watch Kyle Think", "Shelly Spills the Beans"). While the main theme is never far away, the album seems to drag at times.

There are two additional themes in the score, for the characters of Shelly and Kyle ("Shelly Contrary", "Kyle Denial" respectively), but both are used so infrequently that they are more like evanescent motifs than themes and are lost quickly in the nearly hour-long album. "Kyle Denial" does feature one of the best moments of the score, which includes a repeating progression of string chords. The thematic material is less frequent during the latter parts of the score as the music takes on a darker, more frenetic tone. A racing string motif replaces the quiet main theme in the last half dozen cues. Davis adds a bit of brass in "Tommy Trouble" and "Tommy and Mommy" and draws out a few moments of Matrix-like orchestrations at the climax of the score. The end of this track features a more orchestral version of the racing chord progressions that make up Kyle's theme first heard in "Kyle Denial". The album ends with the longest track, "Tommy Redeems Michael - Finale", which brings back the main theme on the piano and English horn, and rehashes Kyle's theme once more. The Unsaid features a great theme by Davis and some very good orchestrations between the piano, strings, and English horn; it is nice to hear him work in different genres from his more mainstream films.