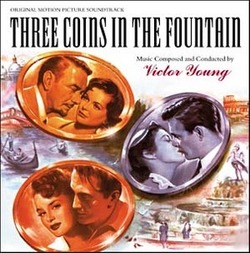 Three Coins in the Fountain

The classic story of three loves has just been released by 20th Century Fox on DVD and now, for the first time, Victor Young's beguiling score finally sees the light of day.

It's a score that displays Young's skills as both a composer and an arranger. But despite Young being himself a superlative songwriter, the film's producer instead called up the successful songwriting team of Sammy Kahn and Jule Styne and allowed them one day to come up with a strong pop song based on the title Three Coins in the Fountain. They delivered a classic and it was incorporated into Young's own score.

At last, Victor Young's long-requested Three Coins in the Fountain is available to anyone who has ever been in love, or longed to hear a beautiful film score.