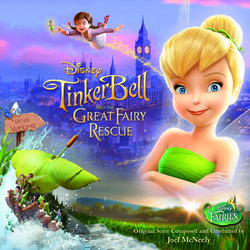 Hot on the heels of the previous release of Tinker Bell and the Lost Treasure, Intrada and Walt Disney Records present the album for the third film in the series, Tinker Bell and the Great Fairy Rescue. Series composer Joel McNeely is again on the job, delivering another magical, exciting, and soaring score that perfectly complements the first two scores and propels Tinker Bell's third adventure forward.

McNeely set the standard for this series, writing for large orchestra comprised of LA's finest musicans to give these direct-to-video adventures an epic, theatrical feel. The album also features the vocals Summer's Just Begun, How to Believe, Come Flying with Me, and How to Believe.