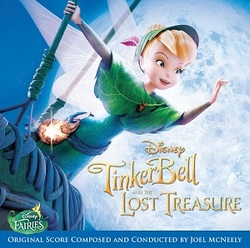 For the 2009 sequel, Tinker Bell and the Lost Treasure, composer Joel McNeely returns to the helm as the series composer, composing a large-scale score for massive orchestra performed by Hollywood's finest, plus chorus, Celtic violinist and ethnic woodwinds (performed by McNeely himself).

A song album was initially released in 2009, but did not feature any of McNeely's score. This releases focuses primarily on the epic, soaring and rambunctious score, but also includes several of the film's vocals, including If You Believe, Fairy Tale Theatre, The Gift of a Friend, and Where the Sunbeam Plays.