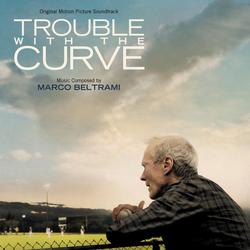 Trouble With the Curve

Clint Eastwood returns to the screen for the first time since 2008 (Gran Torino) as an aging Atlanta Braves baseball scout named Gus who sets out to discover if he still has value as a scout and as a dad. Gus' daughter Nicky (Amy Adams) reluctantly agrees to come along to help him on a final recruiting trip to scout a new top prospect, Bo Gentry (Joe Massingill). Along the way, Gus reconnects with Johnny (Justin Timberlake), a scout for a rival team who has been friends with Gus since Gus scouted him when Johnny was a baseball player. But Johnny also has an interest in Nicky, which Gus does not approve of.

Composer Marco Beltrami (Soul Surfer) provides an emotional score that supports the touching relationship between father and daughter and also the heroics of the game. The soundtrack album also includes the original song "On My Way (To The Big Time)" by Randy Brown.