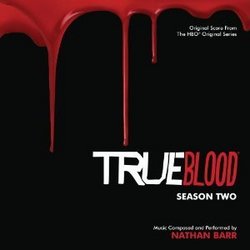 Critics across the country have proclaimed True Blood—the winner of a 2009 Emmy for Best Drama Series and Golden Globe nominee for Best Television Series: Drama—one of the best shows on TV. USA Today called it ‘wildly imaginative,' while the Washington Post found it ‘audacious, outrageous and playfully grisly.' TV Guide hailed the show as ‘graphically sexy and scary, and often wildly funny,' and ‘a broadly entertaining, deliciously twisted slice of modern Southern Gothic.'

Mixing romance, suspense, mystery and humor, True Blood takes place in the not-too-distant future, when vampires have come out of the coffin, thanks to the invention of mass-produced synthetic blood that means they no longer need humans for their fix. Set in the backwoods Louisiana town of Bon Temps, the show follows the romance between clairvoyant waitress Sookie Stackhouse (Anna Paquin, 2009 Golden Globe winner) and 173-year-old vampire Bill Compton (Stephen Moyer).

Composer Nathan Barr (Hostel) has cooked up a second season's worth of his bayou-spiced score.