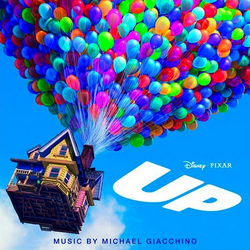 Michael Giacchino's Oscar winning score for Disney/Pixar's Up is one that will stay with you long after the movie is over. The score is as important to the film as the characters, story, and its breathtaking animation. Giacchino's themes and cues enhance the story of an elderly man fulfilling a lifelong promise as well as finding himself along the way. Two main themes dominate the soundtrack: the Adventure theme and Ellie's theme. There are other filler cues in between, but the score revolves these two contrasting yet interlocking themes.

The Adventure theme is used first in the film and is presented on the album in "Up with Titles." The theme represents main character Carl's aspirations to become a world famous explorer, epitomized in the character Charles Muntz. The theme pays homage to old adventure films of the 1930s and 1940s, giving a nostalgic feel. This theme returns again when Carl finally meets Muntz with "The Nickel Tour". The theme takes a turn for the eerie with "Explorer Motel" as it underscores Muntz's relentless hunt for a rare bird. The Adventure theme becomes aggressive in "He's Got The Bird" and "Seizing the Spirit of Adventure." While this theme takes on the role of a dream gone sour, Ellie's theme represents the spirit to carry on.

Ellie's theme is the main theme of the film. It first appears in "We're in a Club Now" as a simple, bumbling piano theme, representing Carl and Ellie's first acquaintance. The theme is engrained in the phenomenal cue "Married Life" which accompanies a pantomime retelling Carl and Ellie's life. The track ebbs and flows as it mirrors the ups and downs of the couple's life. The main melody is repeated throughout and is modulated to match the situation. When the scene ends in sadness, the theme slows and becomes minor.

Ellie's theme is present throughout the film including the cues "Stuff we Did" "Memories Weigh You Down" and "It's Just a House." The film ends with a simple arrangement of Ellie's theme called "The Ellie Badge" which features the simple melody played on piano with string accompaniment.

While the melody is simple, the score for Up is memorable and takes the listener on a lifelong journey and never lets go. Michael Giacchino takes the simple and makes it great in this score, and the results are breathtaking.