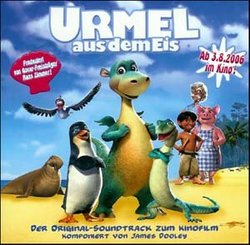 Impy\'s Island (or Urmel Aus Dem Eis) is a German animated film that is unfortunately not available here in America. Based on a series of beloved German children\'s books from the 1960\'s and 1970\'s, the film is somewhat of a slapstick comedy with a cast of animated creatures. Recorded with a full orchestra in Bratislava, Slovakia, James Dooley\'s score follows in the tradition of Harry Gregson-Williams\' The Borrowers and Chicken Run (with John Powell) as a light, bouncing score with themes performed by solo clarinets and small string ensembles. Where Dooley\'s recent work on Madagascar and The Madagascar Penguins in \'A Christmas Caper\' was jazzy and Bond-inspired, Impy\'s Island is more along the lines of his other recent animated work, the short film First Flight.

Dooley introduces the main theme in the "Main Titles" which is much subtler than, say, his work for the SOCOM: U.S. Navy SEALs video game franchise. However, he is continuing to prove himself capable of writing music for multiple genres, sometimes at once. Impy\'s Island builds in the same way as First Flight, but it does so over 40 minutes instead of 8. Dooley begins the score quietly and restrains his use of brass until much later. The main theme also evolves over the course of the score until, in the final cues, it is used more as a dramatic, action theme than the bouncy, almost romantic style from the main title. During this evolution, the theme is used often, sometimes over moving percussion ("Professor Habakuk Tibatong\'s Island") or quietly on solo clarinet ("Impy Cries"). One of the most fun cues is "Chasing Impy", which has some Elfman-like orchestrations over a heroic version of the theme.

For those of you listening carefully, you will hear an excerpt of Tchaikovsky\'s "Dance of the Plum Fairies" from The Nutcracker in "Plant Fight", which is played over plucked strings and woodwinds. From here, the brass begins to become more prominent in "Monte Helps Impy" and a brief appearance by a choir arrives in "Impy Is Alive", which opens with a great statement of the main theme with the full orchestra. As I mentioned before, the style of the score changes to more dramatic, brass-dominated music, and this fully takes over in "Ping to the Rescue" and continues with "Saved" and "Underwater Rescue Piggy-Barrel Impy Ship". The finale takes place over two cues, "The Final Stretch" and "Volcanic Eruption", which, in the first of these, cuts back the tempo a bit and add a choir, kind of like the final cue from Zimmer\'s Pirates of the Caribbean: Dead Man\'s Chest. In "Volcanic Eruption", the theme is heard in a very heroic statement and the horns and trumpets get a few solos here as well.

One of the best things about this score is the way Dooley builds and develops the musical ideas throughout the film. A bit of Caribbean-style percussion and guitar ends the album with a final statement of the full theme. The album is currently only available overseas, and can be found on Amazon.de.