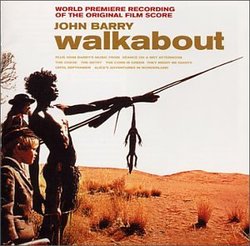 Once again, Silva Screen Records has released another re-recording of a classic (and unavailable) John Barry film score.  This time, Nic Raine and the City of Prague Philharmonic took it upon themselves to record music from Barry's Walkabout.  No didgeridoo here, this is full-on Barry at his best, with a haunting choir and lyrical themes.

Beginning with the main title, the score slowly builds tenderly into the main theme, performed (as always) by strings with flute accompaniment.  Lush and dramatic, this score is poetic and at times reminded me of Gabriel Yared's similar score to The English Patient which wouldn't come about for more than 25 years.  The haunting songs, performed by the Crouch End Festival Chorus, are just as melodic, but even more moving because of the lyrics, taken from the traditional children's song "Who Killed Cock Robin".  It's a dark number, filled with plenty of classic Barry nuances.  This score runs about 27-minutes long, and it flew by rather quickly due to the intricate and memorable themes used throughout.

Cues from other Barry scores are included on this album.  They Might Be Giants, the modern-day Sherlock Holmes comedy, has an enjoyable main theme - but an even more enjoyable march ("The Game's Afoot").  Barry's main theme from his unused score to Prince of Tides (he withdrew from the film due to a conflict with Barbara Streisand) became his main theme for his compilation album, "Moviola".  Heavy on the drama and grandeur, this is a wonderful and relaxing theme by Barry.

Barry takes the jazzy approach on The Chase, and a suite from Alice's Adventures in Wonderland showcases Barry's more whimsical and humorous styles.  Falling slightly into cliché, The Betsy utilizes a saxophone for a sultry effect.  The Corn is Green and Until September are lush romantic cues, and Barry makes no excuses for that.  Séance on a Wet Afternoon allowed Barry to take the minimalist approach, with a rather percussive and almost jazzy rhythm.  There's plenty of suspense in this cue, and again gives us a glimpse at some of Barry's earlier work done when he was just starting out on the Bond films.

The album runs a satiating 65-minutes long, and sounds quite good.  As most of the Silva re-recordings have been, there is a concert-hall feel to some of the cues, but I think they started to close-mike the recording sessions, adding a touch of "studio recording" to the sound.  Walkabout is a great score, and is worth getting this album for alone - but the other 38-minutes of music are a nice addition as well.