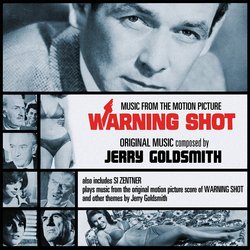 This fascinating release is brought to you courtesy of La-La Land Records, Paramount Pictures and Capitol Records. For the first time ever Jerry Goldsmith's moody, jazzy score to the 1967 cop thriller Warning Shot comes to CD.

Tracks 1-16 of this release feature the premiere release of the original soundtrack recording. Unfortunately, no scoring masters survived, and the only source for this recording is the film's monaural music stem. Rising and falling volume levels have been smoothed out—but this results in varying levels of hiss. In addition, low levels of sound effects and dialogue "bleed" can be heard from adjacent channels from the film's audio masters. These have been minimized, but not entirely eliminated, with a light stereo ambiance added to the monaural source to improve listenability. In other words, it's like our previous release of Seconds.

Tracks 17–27 feature the Si Zentner Album remastered from the original 1/4 inch stereo album master. Tracks 17-22 feature Si's interpretation of Jerry's score while tracks 23-27 features Si's interpretations of famous themes of Jerry Goldsmith, including Man from U.N.C.L.E., A Patch of Blue and The Prize.