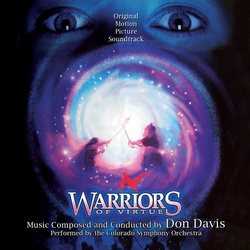 BUYSOUNDTRAX Records will be releasing the soundtrack for Warriors of Virtue, featuring music composed by Don Davis.

Released in 1997, Warriors of Virtue is a fantasy film filled with lofty ambitions that failed to find its audience. The film is the product of four wealthy brothers, transplanted from Hong Kong to settle in Colorado, the Law brothers. When the Law brothers were finished shooting the film, they were convinced their film deserved a fully orchestral, swashbuckling score to bring life to the world of Tao and assist its journey to acclaim and fortune. The brothers hoped to hire John Williams to score the film but his agent referred them to another composer by the name of Don Davis.

He began work on scoring the film in 1995, two years prior to the film's release. The producers told him they wanted a broad symphonic score, with a separate theme for each of the five Warriors and as one of the brothers was involved with the Colorado Opera Company, he wanted to commission a piece of concert music that involved these five themes, representing the virtues in the manner of an oratorio. This oratorio, called 'Of The Illuminated,' received its premiere at the Breckenridge Music Festival in the summer of 1995. This unique (and lengthy) affiliation with the project allowed the composer to be a part of the creative team from the beginning of the project. The score was recorded with the Colorado Symphony Orchestra and mixed by Armin Steiner.

Warriors of Virtue was first released on compact disc by Kid Rhino with a short presentation of the score and nine songs at the time of the film's release and later released again in a better presentation by Prometheus Records minus the songs and with more of Don Davis' score restored. Buysoundtrax Records now presents a new release of Warriors of Virtue, with liner notes written by author Randall Larson including new comments from the composer, along with new mastering from Digital Outland, allowing a new audience to discover Don Davis' wonderful score.