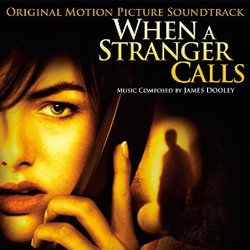 When a Stranger Calls

Review: When a Stranger Calls

His first work in the horror genre since writing additional music for Hans Zimmer\'s The Ring, James Dooley\'s first solo feature score is a tense, atmospheric, and string-dominated production that captures the dark and frightening mood of When a Stranger Calls. Dooley does not have a prominent main theme, but rather a subtle theme in the strings. None of the score is meant to stand out, instead Dooley keeps the music to a minimum, while maintaining a tense and dramatic tone for maximum effect. The theme can be heard in "Fateful Drive" and "The House", which has a Christopher Young vibe.  The score also features some minor motifs that run throughout the score. The most notable of these is a slow piano motif that appears to be used almost randomly and also reminiscent of the instrumentation in The Ring.

A large amount of the score is atmospheric, bordering on ambient, but Dooley keeps the synth sounds to a minimum, which many composers would fall back on for this sort of film. Some string riffs keeps the tension going and light harp and piano keep the music varied. A second motif in the strings and harp add a sense of motion to the score, which is important for this genre. As the album moves on, the tension builds; "Have You Checked the Children" features some heavy low string use for this purpose. "Curtain Call" raises the volume with some percussion and denser string arrangements, but ends quietly with the harp theme.

The album clocks in at an hour and is a bit on the long side for this type of music. A few tracks on the 5 to 7 minute range might have benefited from some cutting, as this type of music can get a bit hard to listen to. However, Dooley\'s work with the orchestra keeps the music interesting. One of the best cues is "Stranger", which introduces some brass over a moving string motif. The score picks up the pace as well as adds more layers to the orchestration in "Hunting Jill" where the main theme returns in a much more dramatic form. "Aftermath" ends the album with a quiet, but drawn out reprise of the theme with soft chimes and piano in the background. Dooley\'s score functions very well in the film and while it can be a difficult listen as an album, there is certainly some very interesting music here.