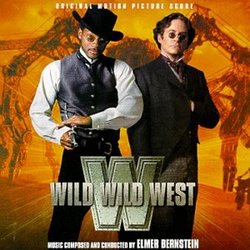 by David A. Koran January 27, 2000
3.5 / 5 Stars
Elmer Bernstein, best known for westerns such as The Magnificent Seven, The Hallelujah Trail and a large number of John Wayne’s westerns, he enters the 90s with his take on the latest TV show-cum-movie, Wild Wild West. With all these great films to his credit, it’s not supposed to be that hard to come up with a score if you look at your past. However, Bernstein took a bit from one of his former colleagues, Alfred Newman, when developing the theme for this Barry Sonnenfeld opus. A large part of the theme can be broken into two noticeable influences, Newman’s percussive wagon roll in How The West Was Won, and surprisingly, Bernstein’s own main theme in Stripes. The theme pops up now and again, but it’s far from completely permeating the score, which is somewhat low key for such an action epic. Bernstein also tended to want to modernize the western motifs by adding some guitars and electronics, in a Ghostbusters vein, but more so, for desperately trying to relate a grand western to the video-game generation who were the target audiences.

The scoring of this film was also a family affair. Elmer brought his son, Peter, who he worked with before by writing the theme for The Rough Riders, to flesh out two of the cues on this album. You can tell that the close family bond was beneficial to the scoring process on the represented cues. Unlike most collaborations that involve multiple composers which usually result in noticeable breaks in style and evident continuity, the Bernsteins truly have a clue where the other wants to go with a theme. A paltry 30 minutes of score appear on this album, but for a movie that bounced out of theaters almost as quickly as it entered, it may be some final justice. I hope that Elmer doesn’t loose faith in his return to this genre (last truly heard in The Three Amigos) and will hopefully revive the great types of scores he’s been known for. For the dull thud that most summer blockbusters have made this summer, maybe a true and pure western could revive the movie going audience, just unfortunately the Wild Wild West didn’t do.