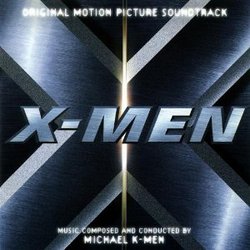 This movie has been one of the most anticipated and talked about films over the past year or so, positively and negatively. Fan anticipation of the film has driven a frenzy of guesses and comments on how the film eventually will turn out. I've even had divorce myself from making judgement while in the employ of the X-Men creator, Stan Lee. Of recent, the choice of composer was also hotly contended, with director Bryan Singer's usual composer busy with another project, eventually the nod was given to the least likely choice, Michael Kamen. With production problems, larger than the initial scope of the film, plaguing the cast, crew and other involved, a cloud of uncertainty hung over the release of the film. Even down to the last minute, directions on the musical accompaniment were altered from the original vision of the composer. That choice left Decca, releasers of the score album, with only bits and pieces to put on an album for issuing by the release date of the film.

I have to say, given all the rumors and initial word of mouth, the film was a rather enjoyable romp, even though it still had some problems. It stayed relatively truthful to the selected X-Men characters, and provided the liberal dose of action that any comic book to movie adaptation is supposed to have. Most of the story was character set-up, not necessarily development, but set-up for the expected sequels, which left many plot threads uncompleted. The score by Kamen provided for the feature also had that feel as well, if not by his own design. Good word has it that Kamen initially wrote a very lyrical score, which is his forte, but which was later rejected by some of the film's executives. Michael was given the task of then re-writing the score to favor a more electronic take on the instrumentation, almost like his score for Event Horizon, a collaboration between himself and Orbital. Some of Kamen's initial themes were still retained for the end product heard in the film, but the score that was, I wished I could have heard.

Most of the good pieces of the score in the film didn't show up on the album, which is a shame. Granted there are a few pieces worth mention, most notably the big dramatic pieces such as "The X-Jet", "Death Camp", "Magneto's Lair", and "Logan and Rogue". It's funny to note that the first figure from "Death Camp" is almost exactly the same from the new "The Outer Limits" T.V. show, and effort to get "spooky" into the aural vocabulary of the opening sequence. I think that if the film's executives allowed him to stick with the path he developed for this first piece, the score would have better supported the film rather than occasionally distracted from it. This is not to say it wasn't a good effort, and given the circumstances of the production, Mr. Kamen could have possibly penned one of his better scores, a chance to give an identity to a new set of big screen superheroes. If the film's executive production crew would have allowed, Kamen could have provided a theme comparable to John William's Superman or Danny Elfman's Batman, but most of what was developed is covered up and hidden away between the sound effects of the film. Kamen does a good job with the small amount of tender moments in the film, something he's had good practice at, but it's evident he was not allowed to stretch beyond the imposed confines. We as listeners, only get hints at what could have been, and would hope that Michael wasn't daunted by his expended efforts for this film to possibly take another go-round with the number of new comic book inspired films coming to screens in the next few years.

As for Decca, and most notably 20th Century Fox, patience could have helped with not only the film, but also with providing what fans want. In return we got a film that's been virtually covered up since it's release, even though it's been a producer at the box office, and several upset people who worked on the film. I can only hope that the next go-around with these characters are treated with more care, and that the folks who put them on screen are treated like artists rather than businessmen. I wouldn't recommend the album as something to pick up for a snapshot of the film, but would recommend seeing it again to listen to what didn't make it to the album. For Kamen, I can only wish him the best of luck in the sci-fi genre, the third time is usually the charm. (NOTE: Highlander is fantasy, not sci-fi, no matter what precedent Highlander II set.)