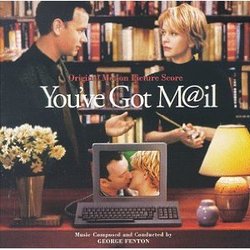 When it first came out last year, the soundtrack to the Tom Hanks / Meg Ryan comedy You've Got Mail contained only one track of music by composer George Fenton in addition to the many songs present in the film. That one track was a good indicator of the score in the film, but wasn't enough to appease many people, myself included. Thankfully, earlier this year, Varese Sarabande released a score album to You've Got Mail which fulfilled that need.

A very whimsical contemporary score, You've Got Mail has a peppy rhythm to it which can best be described as "feel-good" music. There are, of course, more dramatic moments and the required romantic moments, and at 31 minutes in length, any more music might have been too much. Two songs performed by Harry Nilsson are also included on the disc, and give the listener a nice hint at how the other soundtrack album sounds. Unfortunately, the opening title song "The Puppy Song" (also performed by Nilsson) is missing from this album, and I would rather it had be included, and would have made a nice bookend to the CD.

Ultimately, Fenton provides us with a very pleasant score to listen to, without being to lush or intrusive, and if you enjoyed the film I would recommend getting the score. As a side note, the DVD release apparently contains an isolated music track - so if you feel you need more score, you can probably hear it from that.