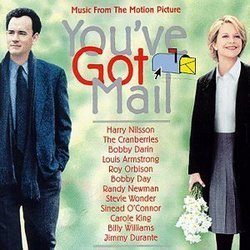 One of the hits that Warner Brothers Studios released last year was You've Got Mail, a romantic comedy by Nora Ephron and starring Tom Hanks and Meg Ryan. The three had previously struck gold with Sleepless in Seattle, and the same turned out to be true with You've Got Mail. Based on the film The Shop Around The Corner, the film focused on the budding romance between two people who communicate over e-mail - but they don't realize that they already know each other and are the fiercest of enemies.

In defining the atmosphere of the movie, director Ephron was very particular in terms of the music she chose. With veteran composer George Fenton providing a light upbeat contemporary score, she needed to pick songs that would accurately reflect the rollercoaster of emotions in the film. In my opinion, she did an amazing job.

From the opening title sequence in which we hear Harry Nilsson's "The Puppy Song" through to the smile inducing (albeit predictable) ending which used Nilsson's rendition of "Over The Rainbow". In between lies a mishmash of songs - from Louis Armstrong to Carole King, to The Cranberries and Sinead O'Connor. There is a notable theme throughout the songs: all of them are about dreaming or love - the two major themes present in the film. All of the songs are light and enjoyable, and make this album a worthwhile addition to any song collection.

It was a tease, however, to include only about 5 minutes of George Fenton's wonderfully light and peppy score. Fortunately, there will be a score release from Varese Sarabande later this month. You've Got Mail will be released on home video next month - supposedly with some special music features! The album is currently available from Atlantic Records, and it worth checking out.